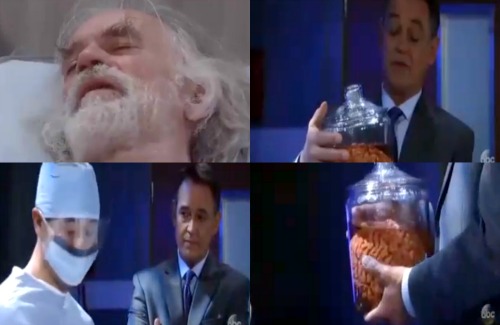 General Hospital (GH) spoilers tease that another shocking twist could be in the works. GH fans think of Kevin (Jon Lindstrom) as kind and lovable, but he may have a dark agenda. Something strange is going on with this potentially secretive shrink.

For starters, there have been way too many mentions of Kevin’s evil twin lately. Ryan was a serial killer who impersonated Kevin and ultimately committed suicide – or did he? There’s a chance that GH will rewrite the storyline and argue that Ryan’s death was faked.

Of course, we can’t forget about the ordeal Jason (Steve Burton) and Drew (Billy Miller) went through. The memory mapping study has been a huge part of the plot for months. Who are the best candidates for this study? TWINS. That’s another sign that Kevin could be mixed up in all this.

Faison (Anders Hove) insisted that finding Drew was a happy accident. While researching a Navy SEAL team, he was stunned to see a face that looked just like Jason’s. Faison eventually realized they were twins and scooped Drew up for his experiment. He already had Andre (Anthony Montgomery) working on this study before he ever knew Drew existed.

That explanation offers another hint. Faison may have had other test subjects since he obviously planned to do all this anyway. He just caught a lucky break when he found Drew. Were Kevin and Ryan involved early on? Could they have been picked up and used for memory mapping?

Perhaps Ryan’s sinister memories were given to Kevin. Ryan was able to hide his mental instability back in the early 90s, so there’s no reason why he couldn’t do it again. Kevin could have the mind of his wicked brother now.

On the other hand, it’s possible that Kevin’s memories were given to Ryan. Maybe Ryan’s dark nature is finally starting to reemerge. That would explain his sudden interest in doing a pathology of a psychopath study. Ryan may have been masquerading as Kevin for quite some time.

Andre’s memory mapping was far from perfect and could never change a twin’s personality entirely. Drew and Jason proved that. The truth about Kevin would have to come out sooner or later. This seems like the perfect opportunity to get the ball rolling.

Genie Francis (Laura) was fired and has no interest in popping up for measly handful of token episodes per year. The show will have to do something with Laura’s husband. General Hospital could send Kevin off to be with her, but they might’ve opted for a more exciting exit instead. Why not reveal Kevin as his evil twin or a victim of mind control?