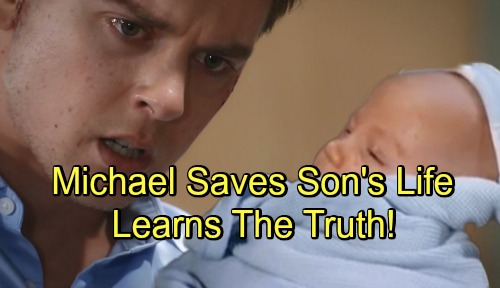 General Hospital (GH) spoilers tease that Michael (Chad Duell) will struggle under the weight of his guilt. He was on a mission to clear Carly’s (Laura Wright) name and protect his baby from Nelle’s (Chloe Lanier) manipulation. So far, Michael hasn’t accomplished either goal.

Nelle made plenty of admissions on the car recording, but she didn’t make the one Michael really needed. She stopped short of confessing to her staircase tumble deception. Of course, the baby drama is the worst part of all this. Michael believes his child is dead, so that’s another failure.

In reality, the baby is at least safe with Brad (Parry Shen) and Lucas (Parry Shen). Nelle can’t hurt him, so that’s the silver lining. For Brad, the switch was mainly about protecting Lucas (Ryan Carnes) from heartache. For Nelle, it’s about getting a good dose of revenge!

General Hospital spoilers say Michael will be in mourning for a while, but there’s hope at the end of all this. He just has to get through the crisis Nelle created first. In the meantime, Lucas and Brad will happily bond with their little one. Despite Brad’s nervousness, he should find a way to enjoy their family.

However, tragedy could strike again soon. Unlike the real Wiley, Nelle’s baby came into the world in a rough setting. They were in a wooded area near a crash site, which obviously wasn’t the healthiest environment to give birth in.

Wiley number two hasn’t even had a real checkup yet. Kim (Tamara Braun) really needs to take a look at the baby and make her assessment. Will there be any surprise health issues? Kim may find something they need to keep an eye on. It could set up a medical disaster later and put Michael on the path to the truth.

There’s no way Brad could suffer through another baby dying. He’d be more determined than ever to save this one. If the kid has some condition that requires specific blood or a bone marrow transplant, that could to lead to the swap revelation. Perhaps Alexis (Nancy Lee Grahn) could reveal that the birth mom and her “baby daddy” aren’t matches.

In his desperation, Brad could point to Michael as the real dad and hope for the best. Will Michael save this child’s life? Could that be how the switch shocker will come out? It’s certainly an option to consider as this GH story heats up.

General Hospital fans won’t want to miss the wild ride ahead. We’ll give you updates as other GH news comes in. Stay tuned to the ABC soap and don’t forget to check CDL often for the latest General Hospital spoilers, updates and news.