General Hospital Spoilers for Next 2 Weeks: Jason Teams Up With Shocking New Ally – Curtis Proposes – Maxie and Peter Heat Up 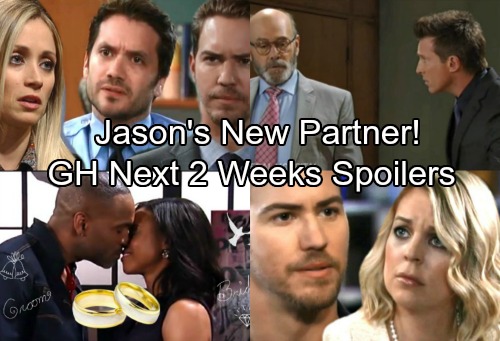 General Hospital (GH) spoilers for the next two weeks tease that things are about to heat up in Port Charles. The week of April 23-27 will bring a confrontation between Lucas (Ryan Carnes) and Julian (William deVry). They’ll bump into each other in town, so GH fans should expect some hostility. Lucas certainly won’t be happy he ran into Julian, but he’ll just have to deal with it.

Since we’re talking about strained run-ins, we should mention the one Maxie (Kirsten Storms) and Lulu (Emme Rylan) are about to have. There won’t be quite as much anger on Maxie’s end this time, but this encounter will still bring some awkward moments. Let’s hope Lulu can earn Maxie’s forgiveness pretty soon.

Meanwhile, Finn (Michael Easton) will grow concerned about Alexis (Nancy Lee Grahn). Maybe she’ll have Sam (Kelly Monaco) on her mind. It’s clear that Sam’s love life is pretty messy right now, so no one would blame Alexis for worrying about her. Finn might sense that she’s a bit distracted and try to help.

Other General Hospital spoilers say Jason (Steve Burton) and Sam (Kelly Monaco) will come home with clues. Jason may focus on a new Valentin (James Patrick Stuart) angle thanks to info found in Switzerland. As for Sam, she’ll grill Curtis about something this week. Sam may want to know how Drew’s (Billy Miller) doing, especially since he went through an intense ordeal with Jim (Greg Evigan).

It looks like Curtis will also stun Jordan (Vinessa Antoine) with a proposal. She’ll do her best to wrap her head around his huge news. The week of April 30-May 4 will deliver even more drama. Nina (Michelle Stafford) will encourage Curtis to keep his investigation going. She’ll think he’s on the verge of bringing Peter (Wes Ramsey) down.

Back with Maxie, she’ll concentrate on the positive side of a difficult situation. Perhaps Maxie’s grief will bubble up again. That’d give her an opportunity to be grateful for Peter. They could be heading into romantic territory before you know it.

Elsewhere, General Hospital spoilers say Jason will want to team up with Lulu. She may be hesitant since she’s planning to interview Heinrik and doesn’t want to scare him off. However, Jason might convince her to hand over info once she’s got the scoop. Whatever happens, Peter will remain as cool as a cucumber. He’ll think he’s got a fool-proof plan, but we wouldn’t bet on it!

Lulu will end up deceiving Dante (Dominic Zamprogna) about what she’s up to, so trouble could be brewing. GH viewers can expect some great material over the next couple weeks. We’ll give you updates as other details emerge. Stay tuned to the ABC soap and don’t forget to check CDL often for the latest General Hospital spoilers, updates and news.