General Hospital Spoilers for Next 2 Weeks: Liz Gets the Shock of Her Life – Sonny Learns New Croton Secrets – Jason’s Challenge 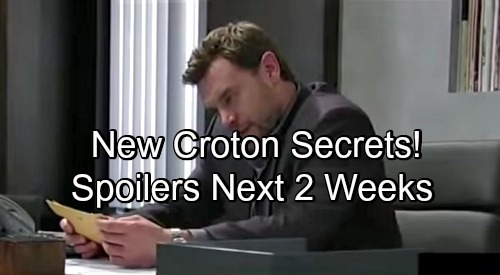 General Hospital (GH) spoilers for the next two weeks tease that some major drama’s looming. The week of June 4-8 will bring some difficult episodes for Anna (Finola Hughes). She’s used to Robin (Kimberly McCullough) being kind and understanding, but that won’t be her initial reaction to the Heinrik news.

Robin will need some time to process everything before she can start to soften. Anna will struggle in the meantime, but Finn (Michael Easton) will show up in Berkeley to comfort her. Of course, that’ll put him out of town when his father comes to Port Charles. General Hospital spoilers say James Read will debut as Gregory Chase this week, so Finn should be in for a shock when he gets back.

Elsewhere, Jason (Steve Burton) will find himself in a challenging situation. Someone will put him on the spot, so this may tie in with Sam’s (Kelly Monaco) fight to help Drew (Billy Miller). Whether the flash drive turns up before the procedure or not, Sam will likely rely on Jason’s assistance. Despite the issues between Jason and his brother, Sam might want him to speak with Drew and see what he can do.

Franco (Roger Howarth) will also take on a tough task this week. It’s possible he’ll make one last effort to prevent Drew’s potential mistake. However, Franco could also start trying to track down Liz’s (Rebecca Herbst) family. It’ll take more than a quick Google search if Franco wants to pull this off. He’ll have to dig deep for info and that could bring some bombshells.

The week of June 11-15 will leave Liz truly stunned, so it’s possible Dr. Jeff Webber or some other face from GH history will return. Speaking of blasts from the past, Nelle (Chloe Lanier) will get one. However, it may not be a pleasant reminder of days gone by. Michael (Chad Duell) pushed Spinelli (Bradford Anderson) to dig for dirt, so his hunt may bring someone surprising out of the woodwork.

We’ll also see some tough moments for Valentin (James Patrick Stuart). He’ll be in denial as Nina (Michelle Stafford) moves forward with the divorce. However, Nina will show some sympathy for someone soon after. Maybe she’ll finally cut Peter (Wes Ramsey) some slack or even ease up on Valentin a tad.