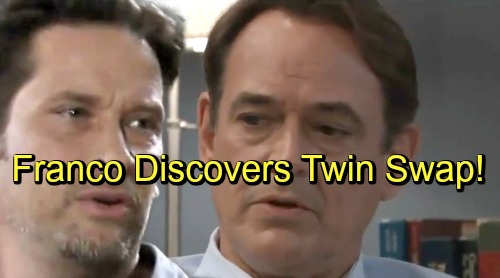 General Hospital (GH) spoilers tease that Franco (Roger Howarth) has a whole lot of drama headed his way. He’s been facing some teen troubles thanks to Cameron’s (William Lipton) attitude, but that’s nothing compared to what’s next. Franco could soon get caught in a dangerous mystery, so he’d better watch his back!

Let’s consider the facts here. We know that Ryan (Jon Lindstrom) swapped places with his twin brother, Kevin (Jon Lindstrom). We also know that we’re going to need characters who can potentially uncover that information.

Laura (Genie Francis) will inevitably realize something’s up, but she’s at a bit of a disadvantage. She’s out of the loop on all the Ferncliff drama. Carly (Laura Wright) could and most likely will be brought into the Ryan revelations, but it could take a while for that to play out. She’s got plenty on her plate thanks to Mike (Max Gail), Sonny (Maurice Benard) and Michael (Chad Duell).

Josslyn (Eden McCoy) will be devastated by Oscar’s (Garren Stitt) diagnosis eventually, so that’ll be one more crisis for Carly to tackle. She doesn’t have a lot of time to solve the twin swap puzzle. Franco, on the other hand, might be the perfect case-cracker. He grew pretty close to Kevin during their sessions together, so he’s bound to notice when something’s off.

Plus, Franco could take another trip to Ferncliff for the art therapy program. GH probably brought Franco into this for a reason other than helping Jason (Steve Burton). They may have been laying the groundwork for Franco’s later discovery. It’s easy to imagine Franco stumbling across Kevin, who would push Franco to help him escape.

Franco would have to mull over the differences he’s seen in Kevin and decide what to believe. General Hospital spoilers also suggest that some wedding mayhem is in the works. We can’t forget that Liz (Rebecca Herbst) and Franco are getting married this fall. Will Franco learn the truth and spark a shocker at the nuptials? That’d certainly be the perfect moment for Ryan to cause chaos.

Although that might be too early for the big reveal, Ryan could still kill somebody at the gathering to secure his or her silence. If he’s smart, Ryan could even blame Franco. After all, he can say whatever he wants while posing as Franco’s therapist. Ryan could try to make sure Franco gets locked up right along with Kevin!

Bottom line, Franco isn’t going to like the crazy road ahead. We’ll give you updates as other General Hospital news comes in. Stay tuned to ABC’s GH and don’t forget to check CDL often for the latest General Hospital spoilers, updates and news.