General Hospital (GH) spoilers for Friday, April 13, tease that Jason (Steve Burton) and Anna (Finola Hughes) will do some brainstorming. In Switzerland, they’ll hope they can avoid getting in too much trouble with the law. Anna and Jason will follow the money trail from Heinrik’s book, but they may find a few other clues along the way. They’ll even run into some familiar faces during this exciting trip.

One of those faces will be Robert Scorpio (Tristan Rogers)! He’ll return to GH in Friday’s episode, so this should be fun for fans. General Hospital spoilers say Emma (Brooklyn Rae Silzer) will be thrilled as they set out on an adventure. However, this Heinrik hunt is risky business and that means they’ll have to stay on guard.

Back in Port Charles, Stella (Vernee Watson) will give Sonny (Maurice Benard) some support. Mike (Max Gail) will have another rough day, so Sonny will feel guilty about pushing his dad’s buttons. He’ll break down in tears as he deals with this tricky situation. 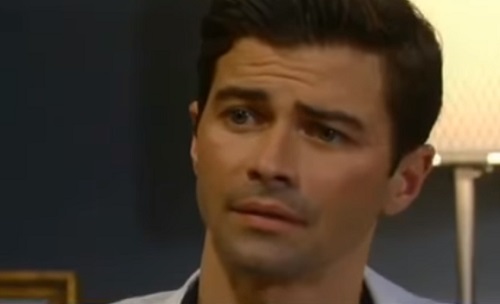 When Stella arrives, she’ll urge Sonny to forgive himself for asking too much from Mike. Stella knows how difficult it is for a family dealing with Alzheimer’s. It’s a tough journey, so you just have to put one foot in front of the other.

At GH, Griffin (Matt Cohen) will get a little more info from Carly (Laura Wright). He’ll wonder what the problem is, so Carly will explain Sonny’s fears. Carly will insist that something’s definitely wrong, but she won’t think it has anything to do with her health. She’ll recap all the spooky stuff that’s happened and hope that Griffin will back her up.

Of course, Griffin could easily side with Sonny on this. He might worry that Carly’s grief is taking a toll on her mind. Thanks to whatever Nelle’s (Chloe Lanier) cooked up in the parking lot, Carly could be in for quite a shock as she leaves. She she may be headed for a breakdown if this keeps up.

Meanwhile, Mike’s spirits will be lifted during a visit with Avery (Ava and Grace Scarola). He’ll want to hit the road with her, but that plan may be nixed by another family member. Even if Mike’s allowed to have some sort of excursion with the tot, it’ll obviously have to be supervised.

Unfortunately, Mike tends to disappear when his loved ones least expect it. General Hospital spoilers say Mike and Avery will soon go missing! Let’s hope someone can step up and find them before they land in harm’s way. We’ll give you updates as other GH news comes in. Stay tuned to the ABC soap and don’t forget to check CDL often for the latest General Hospital spoilers, updates and news.