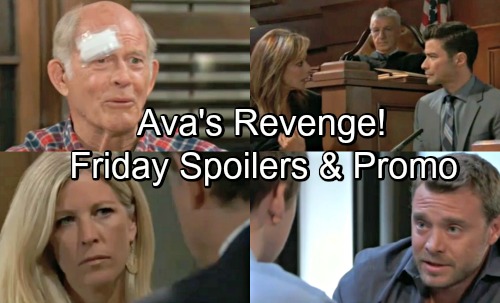 General Hospital (GH) spoilers for Friday, August 10, tease that Ava (Maura West) will seethe over Franco’s (Roger Howarth) shocking news. She texted him to find out why he was acting so bizarre, but she never expected his wild response. Ava looked furious when she read that Kiki (Hayley Erin) and Griffin (Matt Cohen) had sex.

Franco had been texting Alexis (Nancy Lee Grahn) like a madman, so there’s a good chance Ava got his message by mistake. Nevertheless, the damage is done. Ava will give Griffin a cold glare as he testifies. He’s definitely going to pay for this! On the stand, Griffin will clarify the nature of his relationship with Kiki. Alexis will want him to confirm that they’re just friends, which should be doable.

Griffin hooked up with Kiki, but he’s committed to Ava. As long as Alexis doesn’t take this line of questioning any further, Griffin will believe he’s off the hook. Unfortunately, the cat’s already out of the bag. Later, Ava will corner Kiki and ask if there’s something she’d like to tell her.

Kiki may play dumb at first, but Ava won’t let her daughter get away with this. The same goes for her betraying boyfriend. Ava’s revenge is brewing, so GH fans won’t want to miss all the fun.

In the meantime, Oscar (Garren Stitt) will open up to Drew (Billy Miller). He’ll admit that Josslyn (Eden McCoy) hasn’t wanted much to do with him lately. Drew will argue that Joss has been retreating from everyone, not just Oscar. He’ll probably push his son to bear with Josslyn a little longer. She’s had a lot on her plate.

Elsewhere, Josslyn will lash out at Cameron (William Lipton). She’ll accuse him of stealing something, so Cam will have to explain his actions. Over with Carly (Laura Wright), she’ll get a visit from Kevin (Jon Lindstrom) – or perhaps his evil twin, Ryan (John Lindstrom). A swap likely went down, but Carly won’t know anything about that. She’ll just listen as the doc asks her to come back to therapy.

Other General Hospital spoilers say Chase (Josh Swickard) will grill Jason (Steve Burton) at the PCPD. He’ll push Jason to seek justice, so this may be about Peter (Wes Ramsey). GH viewers know Peter got off scot-free for now. He’s penniless, but at least he can remain a free man.

Chase may think there’s something Jason can do to change that. Of course, Jason seems determined to put that whole ordeal behind him. He’s got more pressing problems anyway. Jason’s still stuck in a legal jam for barging in Ferncliff with a gun. He’ll undoubtedly wiggle out of trouble sooner or later, but Diane (Carolyn Hennesy) has more work to do.

Finally, Sonny (Maurice Benard) will have an emotional conversation with his pop. He’ll let Mike (Max Gail) know that they have to consider placing him in a facility. General Hospital spoilers say Mike will be upset by Sonny’s updates. He’ll think his son’s trying to get rid of him, but Sonny will promise that’s not the case.

It sounds like another gripping episode’s on the way. We’ll keep you posted as other GH details emerge. Stay tuned to the ABC soap and don’t forget to check CDL often for the latest General Hospital spoilers, updates and news.