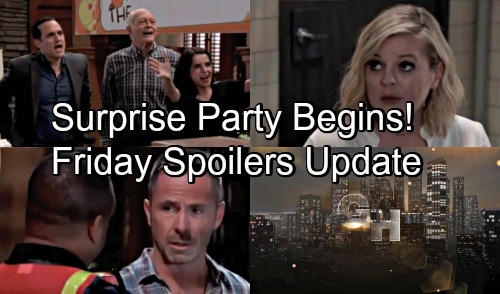 General Hospital (GH) spoilers update for Friday, August 17, tease that Drew (Billy Miller) will have another conversation with Margaux (Elizabeth Hendrickson). She’ll track him down to ask for his assistance with something, so he’ll definitely be intrigued. Margaux’s a bit of a mystery to Drew and everyone else she meets. It’s tough to know all her motives, but she’s clearly set on destroying Sonny (Maurice Benard).

Margaux must be hoping her latest request will help out with that. Getting Drew involved could be tricky, but Margaux might coax him into it with a little deception. She’s also got that flash drive as her ace in the hole. There’s no guarantee Drew will make any kind of deal with Margaux, but she’ll at least have some power she can save for later.

Meanwhile, a shindig will get underway. Mike (Max Gail), Sonny (Maurice Benard), Sam (Kelly Monaco) and Bobbie (Jacklyn Zeman) will gather for a surprise party. They’ll cheer for the guest of honor, but who will it be? Kristina (Lexi Ainsworth) and Carly (Laura Wright) both deserve a homecoming gathering, but it could be someone else instead. Expect the unexpected on GH!

Other General Hospital spoilers say Julian’s (William deVry) expansion plans will hit a snag. A construction worker will fill him in on the problem and spark a battle with Sonny in the process. Julian will assume that Sonny and Jason (Steve Burton) are behind this. They’re causing every delay they can think of, so Julian will do his best to learn why.

Over with Nina (Michelle Stafford), she’ll make sure Maxie’s (Kirsten Storms) up to a challenge. Maxie will insist she’s going to do it because it’s what Nathan (Ryan Paevey) would want. It appears Nina and Maxie may be visiting the state pen. This may be when Madeline Reeves’ (Donna Mills) brief stint will kick off. Maxie might head in for a quick chat about Nathan’s demise as well as James’ birth.

Valentin (James Patrick Stuart) will sit down for a discussion with Madeline in the near future. He’ll have some interesting questions to ask, so he should get some interesting answers in return. For now, Valentin will have to contend with Peter (Wes Ramsey). GH spoilers say Peter will argue that Valentin owes him. He’s flat broke, so he’ll probably push Valentin to fork over some cash.

General Hospital viewers won’t want to miss all the action in Friday’s episode. We’ll give you updates as other GH news comes in. Stick with the ABC soap and don’t forget to check CDL often for the latest General Hospital spoilers, updates and news.