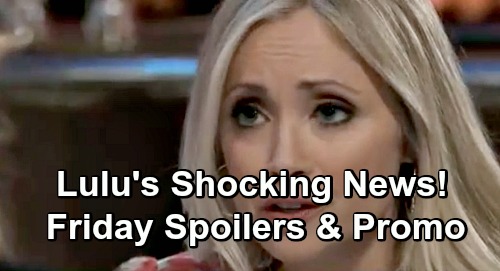 General Hospital (GH) spoilers for Friday, December 14, tease that Nina (Michelle Stafford) will try to stick to her plan. She told Valentin (James Patrick Stuart) she was ready to leave Wyndemere, so she’ll think it’s time for her to go. Valentin will beg Nina not to and make another pitch for a future together. He’ll believe they can get their relationship back on track if she’ll just give him a chance.

While Nina makes her choice, Jordan (Briana Nicole Henry) will mull over all the murder mayhem. She’ll tell Curtis (Donnell Turner) that she must be missing something, but she just won’t know what it is. Ryan (Jon Lindstrom) has done an excellent job of covering his tracks, so this mystery will remain in play for a while. He’s really stumped the PCPD, but Jordan will be determined to stop this cruel killer.

At Charlie’s Pub, it looks like Kristina (Lexi Ainsworth) will get on Julian’s (William deVry) bad side. He’ll declare that she’s fired, so she’ll either have to smooth things over or seek employment elsewhere. Daisy (Kelsey Wang) could probably pull Kristina further into the cult if she helps her out!

Across town, Laura (Genie Francis) will drop a bomb on Lulu (Emme Rylan). During a chat about Charlotte’s (Scarlett Fernandez) bullying, Laura will admit she knows who the victim is. She’ll explain that she put it all together and figured out Aiden (Jason David) is the one being targeted.

General Hospital spoilers say Lulu will reel over this huge news. She’ll struggle to wrap her head around the fact that Charlotte’s bullying her own cousin. Lulu will realize she has to get a grip on the situation, so expect her to take action soon enough.

Stella may not see the harm in Mike and Yvonne’s connection. They’re always monitored at the facility, so it’s not like they can cross any lines. However, Marcus will explain why keeping them apart is so important to him. He already feels distant from his wife thanks to her memory loss. Marcus doesn’t need another obstacle as he savors what time he has left with his Yvonne.

Other GH spoilers say Mike will have a serious meltdown. He’ll lash out at Sonny (Maurice Benard) as Carly (Laura Wright) looks on. Mike will demand to know where Sonny’s father is, so it’s clear that his Alzheimer’s is getting worse quickly. Sonny will have to accept that Mike’s fading fast, but that’s certainly not going to be easy.

Finally, there’ll be some confusion over baked goods. Cameron (William Lipton) set out to purchase some pot, so he may bake them into some brownies on Friday. It appears Franco will taste one and notice that something’s up.

Cameron may cover his tracks for now, but he’ll be in big trouble once he’s caught and arrested next week! We’ll give you updates as other General Hospital details emerge. Stay tuned to ABC’s GH and don’t forget to check CDL often for the latest General Hospital spoilers, updates and news.