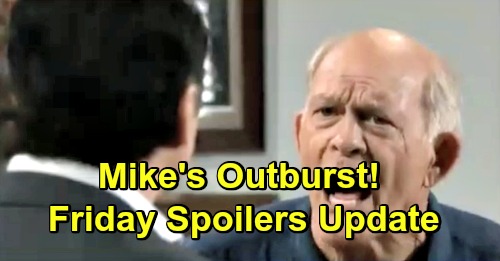 General Hospital (GH) spoilers for Friday, December 14, tease that Marcus (Nigel Gibbs) will encourage Stella (Vernee Watson) to speak her mind. He’ll realize she’s holding back on the topic of Mike (Max Gail) and Yvonne’s (Janet Hubert) bond, so she might as well share her point of view. Marcus was upset when he found out how close they were, but Stella may not think it’s a big deal.

In fact, Stella may argue that this friendship will provide support and stability. Mike really enjoys his time at Turning Woods and Yvonne is a huge reason why. Yvonne also enjoys Mike’s company, so they’re helping each other. However, Marcus just won’t be willing to share his wife. He can feel Yvonne slipping away, so he won’t allow Mike to pull her away faster.

Meanwhile, Mike’s outburst will leave Sonny (Maurice Benard) upset. General Hospital spoilers say Mike won’t remember much in that moment. He’ll ask Sonny where his father is and continue to rant. Carly (Laura Wright) will witness this painful episode and try to help Sonny tackle the drama. Losing his dad like this is difficult, but there’s nothing he can do about it.

GH spoilers say another family crisis will hit across town. Some stunning news is coming up for Lulu (Emme Rylan). Laura (Genie Francis) will reveal that Charlotte (Scarlett Fernandez) is bullying Aiden (Jason David), so Lulu will have to form a plan. She can’t let Charlotte torment any child, but especially not her own cousin.

Over with Franco (Roger Howarth), he’ll believe something’s amiss in a brownie batch. If Cameron (William Lipton) whips up some special pot brownies for Oscar (Garren Stitt), Franco might swipe one and grow suspicious. At Charlie’s Pub, Kristina (Lexi Ainsworth) will cross the line and get herself fired. Julian (William deVry) won’t appreciate Kristina’s behavior, so we’ll see if she can fix this.

Other General Hospital spoilers say Valentin (James Patrick Stuart) will push for a reunion again. He’ll want to stop Nina (Michelle Stafford) from moving out of Wyndemere, so he’ll deliver a heartfelt plea and hope it pays off. Once Valentin gives his spiel, it’ll be Nina’s turn to talk. She’ll make a decision about their future together, so maybe Valentin will actually get his wish.

Finally, Jordan (Briana Nicole Henry) will ponder the murder mayhem and try to figure out how it all fits together. She’ll think there’s something right in front of her that she’s just not seeing. Curtis (Donnell Turner) will listen to Jordan’s findings so far and offer his perspective. They won’t guess Ryan (Jon Lindstrom) is the killer, but anything that inches them closer will be a good thing.

General Hospital fans will want to check out Friday’s hot scenes. We’ll give you updates as other GH details emerge. Stick with the ABC soap and don’t forget to check CDL often for the latest General Hospital spoilers, updates and news.