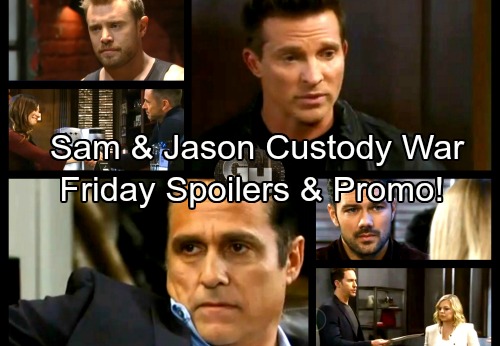 General Hospital (GH) spoilers for Friday, January 12, tease that Peter (Wes Ramsey) will deliver some surprising news. He’ll catch Nina (Michelle Stafford) and Maxie (Kirsten Storms) off guard when he declares their budget is out of control. Peter will hand over a new one that works, but Nina won’t agree. She may argue that Crimson needs more money to keep up with the competition.

Nevertheless, Peter probably won’t back down. He’s concerned with what’s best for Aurora Media, so he’ll think this is the right call. Across town, Lulu (Emme Rylan) will get started on her interview with Nathan (Ryan Paevey). They’ve decided that publishing the truth is the best way to get Faison’s (Anders Hove) attention. Once Faison knows Nathan is his son, he’s sure to come out of hiding.

Lulu will insist that this plan is going to pay off. She’ll contend that the next time Faison shows his face, it’ll be to Nathan. At Julian’s (William deVry) pub, he’ll become interested in a lovely lady. It looks like Kim (Tamara Braun) will enjoy Julian’s company as well. They’ll exchange introductions and try to figure out if they have anything in common.

General Hospital spoilers hint that Julian and Kim could toy with the idea of a romance, but it’s doubtful this will be some great love story. Julian will always carry a torch for Alexis (Nancy Lee Grahn), so they’re bound to find their way back to each other eventually.

Meanwhile, Oscar (Garren Stitt) will ask Drew (Billy Miller) for a favor. It sounds like he’ll be concerned about his inability to defend himself. At the boxing gym, Oscar will ask Drew to teach him how to fight.

Drew and Oscar will spend the day bonding, which is great. Quality time is important for this father and his son. That issue will come into play for Jason (Steve Burton) as well. Custody of Danny (T.K. Weaver) was just mentioned in the divorce proceedings. Things will get tricky, especially when Alexis plays hardball.

Friday’s GH preview shows Sam (Kelly Monaco) firing someone, so it might be her own mother. Jason has been nothing but kind and understanding throughout all of this. It’s not fair for Alexis to be so harsh. Diane (Carolyn Hennesy) has also been snappy, but that’s not Jason’s fault. He’s been battling his hotshot lawyer as each problem arises.

Bottom line, this divorce won’t be as straightforward as Sam and Jason planned. Over with Sonny (Maurice Benard) and Carly (Laura Wright), they’ll discuss the end of “JaSam’s” marriage. Carly will contend that sometimes people make wrong turns and need some help, but she’ll agree to back off for now.