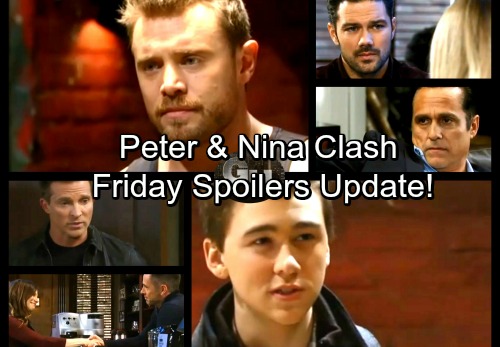 General Hospital (GH) spoilers for Friday, January 12, tease that Sam (Kelly Monaco) will make a bold move. She’ll announce that someone’s fired, so it sounds like Alexis (Nancy Lee Grahn) may be off the divorce case. The proceedings certainly came with a few hiccups. Jason (Steve Burton) simply wants Sam to be happy, but Diane (Carolyn Hennesy) and Alexis bickered every step of the way.

These fierce attorneys are just trying to do their jobs, but they’re definitely making it harder on Sam and Jason. It looks like the whole meeting will fall apart thanks to the custody issue. Jason may not ask for too much, but he wants to get to know his son. Alexis might brush off Jason’s desires, which won’t fly with Sam. That could lead to that firing we mentioned.

Meanwhile, Drew (Billy Miller) will do his best to guide Oscar (Garren Stitt). He’s faced some ups and downs with his son, but GH spoilers say they’re on the right track now. Oscar will visit Drew in the boxing gym to ask for assistance. He’ll need some help learning how to fight. Drew may advise against violence, but a little self-defense course couldn’t hurt.

Elsewhere, Carly (Laura Wright) and Sonny (Maurice Benard) will debate Jason’s situation. Sonny may suggest that “JaSam” is over and that’s that. Carly will still think stubbornness is the problem, but she’ll try to stop plotting. This is something Sam and Jason have to figure out for themselves.

Other General Hospital spoilers say Kim (Tamara Braun) will make a new pal in town. She’ll meet Julian (William DeVry) at his pub and they’ll become fast friends. Could this turn into a romance as well? Kim will definitely have a twinkle in her eye when she gazes at Julian. Perhaps she’ll be open to the idea of love, but she’d better watch out. Julian’s hung up on Alexis, so Kim could get her heart broken.

Lulu (Emme Rylan) will also begin her interview with Nathan (Ryan Paevey) on Friday. He may have some doubts about their plan, but Lulu will remain completely confident. She’ll believe Faison (Anders Hove) will come running straight to Nathan once the interview’s published.

At Crimson, Peter (Wes Ramsey) will shock Nina (Michelle Stafford) and Maxie (Kirsten Storms) with a smaller budget. He’ll think their old one was way too extravagant. Peter will insist that they have to rein it in, but Nina will surely protest. She’s trying to put out a great product and that’ll become more difficult with less money.

Nevertheless, it seems Nina will just have to get creative. It Peter sticks to his guns, there’s really nothing else Nina can do. We’ll give you updates as other General Hospital news comes in. Stay tuned to ABC’s GH and don’t forget to check CDL often for the latest General Hospital spoilers, updates and news.