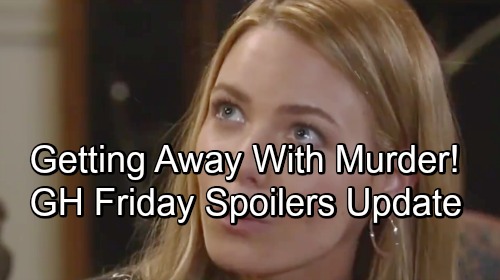 General Hospital (GH) spoilers for Friday, July 20, tease that Lulu (Emme Rylan) will grill Maxie (Kirsten Storms). Down by the docks, Maxie will impatiently wait for the launch. Lulu will try to figure out why Maxie’s so desperate to get to Spoon Island. She’ll push Maxie to spill what’s bothering her, so expect a recap of all the Liesl (Kathleen Gati) suspicions.

Lulu wouldn’t want to miss this drama, so she’ll jump on the launch, too. Meanwhile, Valentin (James Patrick Stuart) will finally get off the hook for whacking Franco (Roger Howarth). He was simply in the wrong place at the wrong time, so Chase (Josh Swickard) will have to free him. Franco will maintain that Liesl’s to blame, which should send Curtis (Donnell Turner) out on an urgent hunt.

Curtis will ultimately catch Liesl as she tries to flee. She’ll be taken to the police station for an interrogation pretty soon. Once Finn (Michael Easton) hears the latest news, he’ll join Valentin, Lulu and Maxie at Wyndemere. It’s a good thing help’s coming. Nina (Michelle Stafford) and Peter (Wes Ramsey) certainly need it! In the stables, they’ll be stuck as the fire rises all around them.

Other General Hospital spoilers say Diane (Carolyn Hennesy) will stop by Ferncliff. She’ll want to see Carly (Laura Wright) and perhaps offer some reassurance. It seems Diane’s the only one who can get to Carly right now. Sonny (Maurice Benard) had no luck, even after hurling some serious threats at Rupert (Patrick Cox).

Of course, drugged Carly will barely be able to tell who’s there anyway. She’ll murmur about stopping Michael’s (Chad Duell) wedding, but it’s a little late for that…well, sort of. Michael and Nelle (Chloe Lanier) tied the knot at GH, but there was probably some trickery involved. That marriage license was likely signed with disappearing ink.

It’s all part of the plan, which Chase (Josh Swickard) suggested. However, it looks like some doubts will creep in for Chase on Friday. After Michael reveals that Nelle took the bait, Chase will worry about the danger. He’ll feel like Michael has to be even more careful now Nelle’s onto him.

Michael will promise to watch his back, so the plot will keep moving right along. General Hospital spoilers say Nelle will have a crucial conversation soon after. She’ll note that she didn’t get away with murder, so Chase may stir up some Zachary Grant talk.

Despite Nelle’s claims about Zach, she’ll be prepared to get rid of her new husband. Nelle will ultimately urge Chase to kill Michael, which is exactly what they wanted. Unfortunately, this scheme’s destined to spiral out of control.

At home, Sonny (Maurice Benard) will mull over all the mayhem he’s dealing with. Michael, Mike (Max Gail) and Carly will all be on his mind. However, Carly’s situation may his priority in that moment. Sonny feels like he’s let her down, but Jason (Steve Burton) will try to lift his spirits. He’ll insist that none of this is Sonny’s fault, but he’ll agree they need to fix this for Carly ASAP.

Getting Carly out of Ferncliff will take a while, so they need to focus on easing her punishment. Maybe Diane will come through for Sonny eventually! We’ll give you updates as other GH details emerge. Stay tuned to the ABC soap and don’t forget to check CDL often for the latest General Hospital spoilers, updates and news.