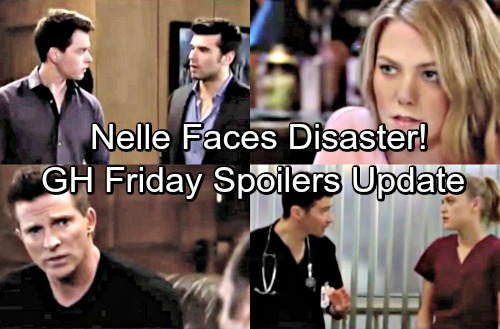 General Hospital (GH) spoilers update for Friday, July 6, tease that Sonny (Maurice Benard) will battle concerns. He’s worried that his past may come back to haunt him, so he’ll open up to Jason (Steve Burton) about it. Mike (Max Gail) dug up the body in Croton and moved it to the site of Charlie’s Pub. He suggested it won’t be found unless the place is torn down and the foundation is disturbed.

Unfortunately, Julian (William deVry) intends on doing some renovations. He wants to expand, so he could easily stumble across this shocking evidence. Sonny doesn’t know about Julian’s plans yet, but he’s sure to get nervous when he finds out!

For now, let’s talk about someone else’s problems. Peter’s (Wes Ramsey) still stuck at the cabin, so he’s really at the end of his rope. When the PC Pioneer kid comes back for his bugle, Peter will be hopeful again. He’ll ask if Wyatt told anybody he was there, but he’ll just face more disappointment.

Wyatt clearly isn’t in a hurry to find help. That’s a bummer for Peter, but things could turn around pretty soon. General Hospital spoilers say Wyatt will spot Liesl’s (Kathleen Gati) shoes before he heads out. He’ll also hear her distinctive accent, so those clues will come in handy when he blabs to Franco (Roger Howarth) and Finn (Michael Easton).

Meanwhile, Maxie (Kirsten Storms) and Lulu (Emme Rylan) will come through for each other. They’ll exchange favors, so it’s nice to see their friendship back on track. It turns out Lulu and Maxie will even meet Colonel Sanders (George Hamilton) together. He’ll be around to promote KFC’s new pickle fried chicken for National Fried Chicken Day. The Colonel should promise that it’s finger-lickin’ good!

Over with Chase (Josh Swickard), he’ll summon Michael (Chad Duell) for a crucial meeting. Jordan (Vinessa Antoine) approved Chase’s plan, but he’ll still need to bring Michael in the loop. This could pose some serious risks, so Michael needs to be aware of them.

Luckily, Michael’s down for anything at this point. As long as it gets Nelle (Chloe Lanier) away from his family and their baby, Michael’s ready for the challenge. Speaking of Nelle, she’ll pester Ava (Maura West) across town. Nelle will have time to kill after her appointment’s delayed, so she’ll spend it getting on Ava’s nerves.

Ava will shut down Nelle’s veiled threats and make a few of her own. She’ll suggest that self-preservation is her priority. If Nelle dares to get in the way of that, there’s going to be trouble. That baby blanket’s just waiting to be turned over to the cops!

At GH, Griffin (Matt Cohen) will try to talk some sense into Kiki (Haley Erin). He won’t see why she should hide their one-night stand from Alexis (Nancy Lee Grahn). As Kiki’s attorney, Alexis would keep the news confidential. Kiki would benefit by coming clean, but it seems she’ll be too afraid of potential leaks.