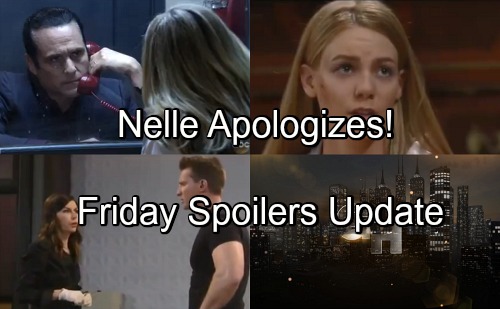 General Hospital (GH) spoilers for Friday, June 1, tease that Nelle (Chloe Lanier) will catch Michael (Chad Duell) off guard. At the Quartermaine mansion, Nelle will insist that she has something to tell him. She’ll want to express how sorry she is for what she’s done to Carly (Laura Wright).

Michael will naturally be a bit puzzled. He may wonder if Nelle’s going to confess her deception, but there’s no chance of that happening. Instead, Nelle may reflect on old transgressions and suggest she played a role in Carly’s mental break. She might even contend that she should’ve scrapped the baby shower or lied to the cops about the shove.

Nelle’s accusations are bogus, but she won’t admit that to Michael. She’ll work hard to spin this and make herself look saintly. At Pentonville, Sonny (Maurice Benard) will visit Carly and ask how she’s doing. Of course, Carly will want to cut to the chase. She’ll ask for a progress report and hope there’s proof that Nelle set her up.

Anna will contend that she just wants her son to be safe and happy. She couldn’t bear the thought of Peter sitting behind bars, but she may worry about him going on the run, too. Peter has quite a few enemies these days. GH fans know there’s indeed a threat to Peter’s life. He was just abducted and It seems likely that Dr. Obrecht’s (Kathleen Gati) to blame.

However, Jason will only have Anna’s safety on his mind. He’ll fear that Peter will make another murder attempt when Anna least expects it. General Hospital spoilers say Anna will be more concerned about Peter, so Jason’s warning will fall on deaf ears.

At GH, Nina (Michelle Stafford) will enjoy a sweet moment with her nephew. She’ll cuddle baby James and think about how much Nathan (Ryan Paevey) would’ve loved him. Over with Maxie (Kirsten Storms), she’ll feel like a fool. This could have something to do with a surprising dream that’s coming up. It appears Maxie will imagine Peter popping in and trying to make amends.

Once Maxie awakens, she’ll hate the fact that she’d missed and dreamed of Heinrik. Nevertheless, Maxie will have to acknowledge how much Peter means to her soon. The kidnapping will really leave her rattled! We’ll give you updates as other General Hospital news emerges. Stick with ABC’s GH and don’t forget to check CDL often for the latest General Hospital spoilers, updates and news.