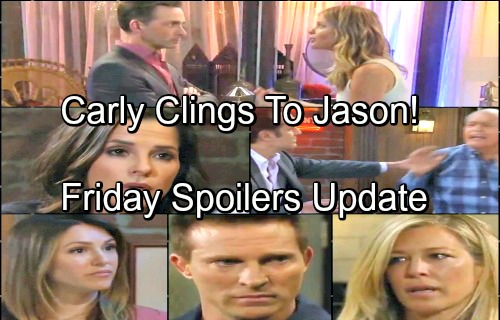 General Hospital (GH) spoilers update for Friday, June 22, tease that Nina (Michelle Stafford) will really let Valentin (James Patrick Stuart) have it. He was hoping to sweep Nina off her feet with a Morocco recreation, but he’ll fail miserably. Nina will unleash her wrath and drop a hint about Peter’s (Wes Ramsey) predicament. She’ll state that Valentin caused her to take justice into her own hands.

Valentin should be perplexed by that declaration. He may suspect that Nina played a role in Peter’s vanishing act, but can he track the hostage down? Nina may storm out before revealing much more. She won’t want to betray Liesl (Kathleen Gati) and put their scheme in jeopardy.

It’s clear that Valentin’s in the dark so far, but Sam (Kelly Monaco) will believe he’s keeping secrets. She’ll express that opinion to Curtis (Donnell Turner) on Friday and try to figure out what they’re missing. These partners will hit a few dead ends, but maybe some new leads will surface eventually.

Other General Hospital spoilers say Carly (Laura Wright) will enjoy Jason’s (Steve Burton) support. She’s so happy to have him there with her at Ferncliff. Mary Pat’s (Patricia Bethune) a real menace, so things have been tough since Carly arrived. She’ll confess that she couldn’t handle this mess without Jason, but a blow will soon be dealt.

Jason will get busted next week, which means more devastation’s ahead for Carly. In the meantime, Alexis (Nancy Lee Grahn) and Julian (William deVry) will be at odds in therapy. Kevin (Jon Lindstrom) will try to keep the peace in his office, but these former flames won’t make it easy.

Thankfully, Julian and Alexis will manage to talk through their problems sooner or later. Brad (Parry Shen) and Lucas (Ryan Carnes) will also have a productive discussion. At GH, the guys will talk about their impending bundle of joy. Lucas will fear that they’ll get attached to the baby and end up having to give him or her back. The anonymous birth mother will have 30 days to mull it over.

Brad may admit he’s worried as well, but they can’t let negativity take control. They should just hope for the best and try to accept whatever happens. That’s all they can do at this point. Across town, Sonny (Maurice Benard) will spot Margaux (Elizabeth Hendrickson) at Charlie’s Pub. He’ll quickly get in her face and unload his frustration.

Carly was sent to pretty much the worst facility possible, so Sonny will have plenty of complaints. He’ll hold Margaux responsible for the nightmare Carly’s enduring. Afterward, Mike (Max Gail) will become agitated and refuse Sonny’s help. He’ll be tired of everyone treating him like he’s an invalid.

Nevertheless, General Hospital spoilers say Sonny will attempt to comfort Mike. He’s still trying to get a grip on caring for his declining dad. Despite the difficulties, they’ll just have to make it work. We’ll give you updates as other GH news comes in. Stay tuned to the ABC soap and don’t forget to check CDL often for the latest General Hospital spoilers, updates and news.