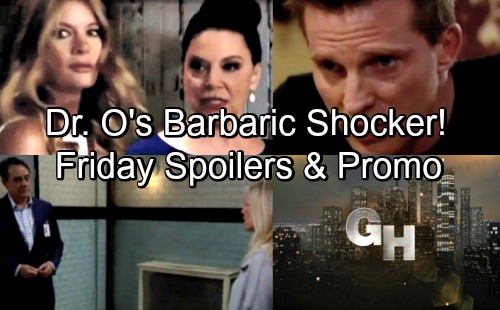 General Hospital (GH) spoilers for Friday, June 29, tease that a big celebration’s on the way. Maxie (Kirsten Storms) gave birth a little early, so she never got a baby shower. Fortunately, that’s about to change. When Maxie walks in Charlie’s Pub, she’ll find herself in surrounded by guests and gifts. There’ll be cheers as everyone congratulates the new mom.

Bobbie (Jacklyn Zeman), Lucy (Lynn Herring) and Lulu (Emme Rylan) will all be on hand for this shindig. Maxie may show off pics of James and open up some useful presents. Every newborn needs loads of baby care items, so Maxie should be appreciative.

General Hospital spoilers say Maxie will also get some great news on Friday’s new GH episode, June 29. It sounds like James will be ready to head home. Maxie’s still upset over the Peter (Wes Ramsey) situation, but at least she’s got a beautiful and healthy kid. James will be a bright spot in Maxie’s life as she tries to move forward.

Meanwhile, Lucy will have Kevin (Jon Lindstrom) on her mind. She’ll be worried about him, so this may be about Laura’s (Genie Francis) time away. Kevin’s throwing himself into work, but that’s only a temporary fix. GH will either have to end this marriage or reunite the newlyweds at some point.

Other General Hospital spoilers say Franco (Roger Howarth) will grow suspicious of Drew’s (Billy Miller) visit. He’ll ask if Drew’s been trying to talk Liz (Rebecca Herbst) out of marrying him, but that’s far from the case. Drew actually stopped by to confirm his wedding invitation. He was surprised to receive it, but he’ll assure “Friz” that he wants them to be happy.

Over with Peter (Wes Ramsey), he’ll beg to be untied. Peter’s really starting to lose it in that secluded cabin, so he’ll be desperate for his freedom. However, he may stand his ground on the whole confession thing. Peter doesn’t want to trade this captivity for a prison stint, so Liesl (Kathleen Gati) may resort to drastic measures. She’ll tell Nina (Michelle Stafford) her plans and face outrage in return.

At Ferncliff, Carly (Laura Wright) will exchange harsh words with Kevin. She’ll mention that Jason (Steve Burton) was fired and sarcastically wonder if Kevin knows anything about that. Kevin will likely claim he was just looking out for Carly, but General Hospital fans have their doubts! Since Kevin’s been lurking with shady expressions, something seems to be up.

Spinelli (Bradford Anderson) will also appear in Friday’s episode. He’ll collaborate with Sam (Kelly Monaco) and Jason on an important project. They’ll hope to get their hands on the flyer and bring back the vanishing ink. Spinelli should pull it off, but there’ll be more work to do. Jason will want to prove that Nelle (Chloe Lanier) was behind the note, so a tricky task’s ahead.

Sam and Jason will try to come through for Carly before she spirals out of control. We’ll give you updates as other GH details emerge. Stay tuned to the ABC soap and don’t forget to check CDL often for the latest General Hospital spoilers, updates and news.