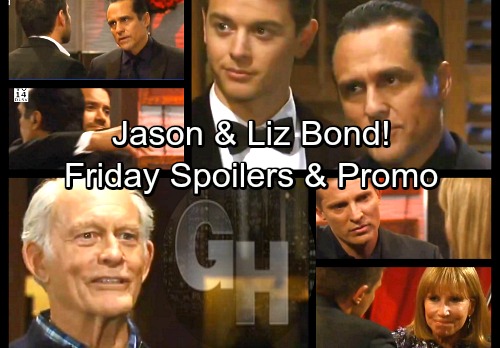 General Hospital (GH) spoilers for Friday, March 30, reveal that it’s finally time to celebrate. Fans are getting a special episode in honor of GH’s 55th anniversary. The show’s been promoting it all week on social media. Several cast members have been doing interviews as well, so this is a big deal!

To kick things off, let’s talk about something Sonny’s (Maurice Benard) cooking up for Mike (Max Gail). His father’s memory issues are quickly getting worse, so he’ll offer a sweet gift before it’s too late. General Hospital spoilers say Mike will see Sonny and Michael (Chad Duell) all dressed up. When he asks what the occasion is, Sonny will suggest that it’s a surprise. 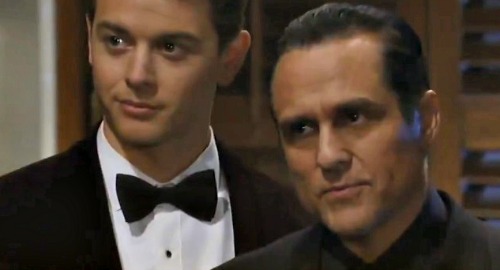 Mike will get a real blast from the past on Friday, so that’ll be fun for viewers as well. It looks like Sonny intends to recreate a time and place that’s familiar to Mike. He’ll want to provide a little taste of the good ol’ days while Mike can still remember them.

Sonny will also enjoy a tender moment with Dante (Dominic Zamprogna) in Friday’s episode. He’ll point out how grateful he is to have Dante for a son. General Hospital spoilers say some flashbacks are on the way, so maybe some of them will involve Dante and Sonny. They faced a rocky road to get to this point, but they’re definitely solid now. Dante will hug Sonny as they acknowledge their relationship.

Kevin (Jon Lindstrom) will express some gratitude as well. He’ll talk to Mac (John C. York) about how much he appreciates his friendship. It sounds like there’ll be a lot of love in this anniversary special! Lucy (Lynn Herring) will be on hand to celebrate and recall warm memories, so stay tuned for her return.

Other General Hospital spoilers say Ned (Wally Kurth) will share a kiss with Olivia (Lisa LoCicero) before breaking into song. It’s always great when Ned has a tune to sing for GH fans. He’ll show off his voice at a big bash in Port Charles and bring delight to the crowd.

You may want to have a tissue box handy for Monica (Leslie Charleson) and Jason’s (Steve Burton) scenes. Jason will tell Monica how much he loves her, so they’re both going to get a bit choked up. He’ll also hash things out with Liz (Rebecca Herbst) and manage to put any lingering issues to rest.

Elsewhere, Bobbie (Jacklyn Zeman) will learn a secret from Scott (Kin Shriner). Once he gives her the scoop on something, Bobbie will suggest that her lips are sealed. This doesn’t seem too serious, but it’ll still be nice to see Bobbie and Scott chatting.

Later, General Hospital spoilers say Bobbie will reach out to Maxie (Kirsten Storms). She’ll do whatever she can to cheer up the grieving widow. Friday’s episode will be packed with tears, excitement and GH history. We’ll give you updates as other news comes in. Stick with the ABC soap and don’t forget to check CDL often for the latest General Hospital spoilers, updates and news.