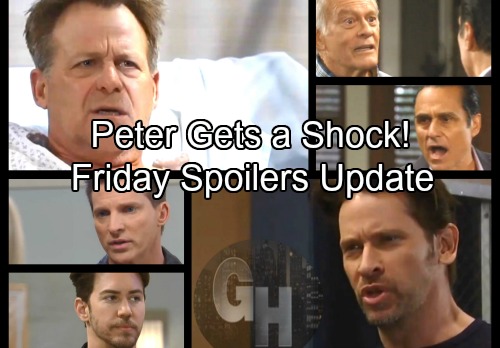 General Hospital (GH) spoilers for Friday, March 9, tease that Franco (Roger Howarth) will have a major meltdown. When Franco pops in at GH, Scott (Kin Shriner) will have a confession to make. He’ll admit he let something slip to Liz (Rebecca Herbst) and now she knows there’s a secret.

Franco will blow his top as he struggles to understand Scott’s motives. He’ll demand to know why Scott would try to sabotage his future with Liz. Scott will likely suggest that he didn’t know what he was saying. He was in intense pain, so he went out of his mind briefly. 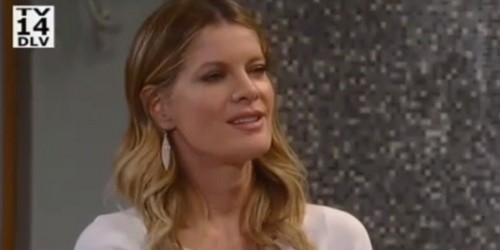 Franco will undoubtedly forgive Scott sooner or later, but that won’t solve his problem. Liz is suspicious, so Franco will have to come clean before long. Meanwhile, Jim Harvey (Greg Evigan) will add to Franco’s troubles. When he spots Sam (Kelly Monaco) and Drew (Billy Miller), he’ll want to give them updates on something Franco-related.

Will Jim mention what happened on the staircase? Will he take precautions by throwing Franco under the bus? Drew will want to have a chat with Franco once Jim spills his story. Fortunately, General Hospital spoilers say Drew and Franco will seek the truth next week. It sounds like Jim’s going down, but more drama awaits first.

Maxie (Kirsten Storms) and Peter (Wes Ramsey) will also head to GH on Friday. Since Maxie’s worried about the test for Huntington’s disease, Peter has agreed to go with her. She’ll appreciate having someone supportive by her side. Maxie’s hoping her baby will be spared from this terrible illness, but she’s certainly concerned.

There’ll be some awkward moments when Jason (Steve Burton) appears in the hallway. He’ll tell Peter and Maxie about his plan to make Heinrik reveal himself. Jason may admit that it’s stalled, but he’s probably not giving up just yet.

Peter should get pretty nervous, but he’ll try not to show it. He’s desperate to keep his true identity under wraps. Elsewhere, Nina (Michelle Stafford) will seem a little hurt. Perhaps she’ll find out Maxie picked Peter as her test partner instead.

Nina has tried to be a good friend to Maxie since Nathan’s (Ryan Paevey) death, so she may feel left out. However, Nina will do her best to get over it and let Maxie handle things in her own way. She won’t want to add any pressure when Maxie’s already got so much on her plate.

Finally, there’ll be some hostility in the Corinthos home. Sonny (Maurice Benard) and Carly (Laura Wright) decided that Mike (Max Gail) needs to stick around. They can’t send him back to Brooklyn in this condition.

Mike will get upset since Sonny doesn’t think he live on his own anymore. He’ll object to this arrangement, but Sonny will insist that it’s necessary. General Hospital spoilers say Carly will attempt to ease the tension, so let’s hope they can all find peace.

It looks like some great scenes are in store for us. We’ll keep you posted as other GH news comes in. Stay tuned to the ABC soap and don’t forget to check CDL often for the latest General Hospital spoilers, updates and news.