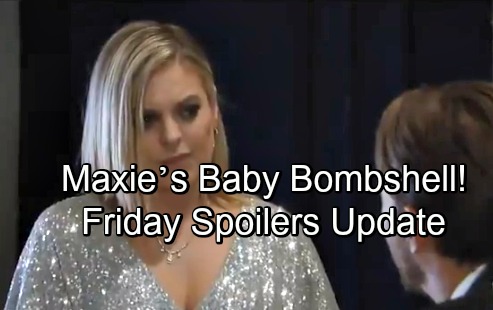 General Hospital (GH) spoilers for Friday, May 18, tease that Jason (Steve Burton) will get updates on Sam’s (Kelly Monaco) stunning find. She spotted Faison’s (Anders Hove) lighter while she was searching through Peter’s (Wes Ramsey) office, so this is certainly a huge break in the case. Sam will tell Jason what’s up and they may figure out that Peter is actually the infamous Heinrik.

Jason will insist that this situation could turn dangerous. He’ll worry that people will get hurt if they spook Peter, so he may want to think carefully about his next move. Jason will definitely want to protect Sam from Peter’s wrath. Sneaky Pete wouldn’t be happy if he knew Sam located the lighter and played a role in his exposure.

At the Nurses Ball, Sonny (Maurice Benard) will remain guarded. He’ll talk to Stella (Vernee Watson) about how it’s best to keep your feelings hidden, but she may have a different opinion. Sometimes opening up and leaning on others can make a big difference in how you cope.

Other General Hospital spoilers say Maxie (Kirsten Storms) will want to ditch the party early. She’s feeling upset about Nathan’s (Ryan Paevey) demise, so she’s not exactly in the mood for more performances. When asked, Peter will be fine with taking Maxie home early. However, they probably won’t be headed there anytime soon. Once Maxie goes into labor, she’ll have to visit GH right away. Let’s hope Peter can get Maxie there before the contractions really rev up.

Meanwhile, Nelle will have a bit of a freak-out. In her hospital room, beeping monitors will create quite a frenzy. Nelle will push Michael to tell her what’s wrong. She’ll ask if it’s the baby, but he’ll offer comfort and try to quiet her down.

Michael will act like everything’s fine, but is it really? This could be something minor or it could be a sign of trouble to come. Elsewhere, Valentin (James Patrick Stuart) will exhibit shady behavior. Nina (Michelle Stafford) will sense that he’s keeping secrets, especially when he’s so insistent on that trip. Despite Valentin’s desire to get out of town ASAP, Nina will surely refuse once Maxie’s baby drama hits.

Other General Hospital spoilers say Drew (Billy Miller) will earn his son’s appreciation. Oscar (Garren Stitt) will be deeply grateful over Drew’s actions, so he’ll share that with his dad. They’ll embrace as they enjoy their new relationship and all it has to offer.

Over with Anna (Finola Hughes), she’ll turn on the waterworks as Finn (Michael Easton) ends his confession. Anna will be moved by Finn’s statement about how much she means to him. He’ll apologize for taking so long to tell her, but she’s been dragging her feet on this romance, too. They’ll both be thrilled about their current truth session.

Speaking of the truth, Anna will need to deliver some important news. She’ll promise that death isn’t drawing near, so that should bring relief for Finn. He was simply confused after he saw Anna’s will. Once they clear this mess up, they can talk about what’s next. Will they pursue a real relationship? They’d be fools not to after this emotional conversation!

GH spoilers reveal that Friday’s episode will include plenty of surprises. We’ll keep you posted as other details emerge. Stick with the ABC soap and don’t forget to check CDL often for the latest General Hospital spoilers, updates and news.