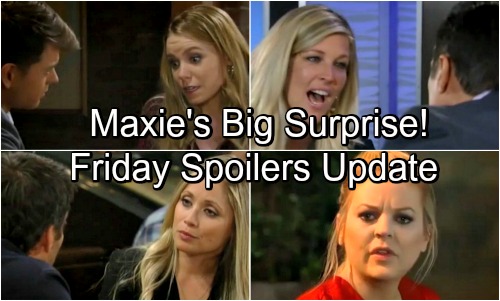 General Hospital (GH) spoilers for Friday, May 4, tease that Maxie (Kirsten Storms) will be startled in the cemetery. When she suddenly hears a sound nearby, Maxie will glance around and ask if someone’s there. Graveyards can be a bit unsettling anyway, so Maxie could find herself feeling spooked.

Fortunately, there’s no reason to be alarmed. It’ll probably be somebody else who wants to reflect on Nathan’s (Ryan Paevey) passing. Lulu (Emme Rylan) might be a good option since the tension’s starting to lift slightly. It’d be another opportunity for GH to show their progress.

Of course, there are other possibilities. Maxie will just have to convince this person to come forward so she can find out! Meanwhile, Peter (Wes Ramsey) will try to talk his way out of a jam. He’ll come up with an excuse for the mementos he collected, but Nina won’t believe a word out of his mouth.

Valentin (James Patrick Stuart) will grill them about their current conflict and attempt to resolve it. However, Nina certainly won’t back down. She’ll call Peter a liar and blast him for researching Nathan. Once this confrontation’s over, Nina’s determination will be at an all-time high. She’ll want to destroy Peter ASAP, so he’d better watch out.

Elsewhere, Robert (Tristan Rogers) will warn Anna (Finola Hughes) about her scheme. She’s cooked up a plot with Jason (Steve Burton), but it could bring major peril. Robert won’t think Anna should put her life on the line. She’s made a career out of being capable and careful, so Robert would hate to see her get killed over an error in judgment.

Nevertheless, Anna will likely dismiss Robert’s concerns and do what she wants anyway. She hopes to meet Heinrik and going through Lulu (Emme Rylan) is her best shot. Speaking of Lulu, she’ll hear Dante’s (Dominic Zamprogna) words of caution. He’ll think she’s just begging for trouble if she hangs around the hornets’ nest too long. Lulu will lie in an effort to appease Dante, which obviously isn’t the ideal plan.

Other General Hospital spoilers say Nelle (Chloe Lanier) will discuss her goal with Michael (Chad Duell). She’ll suggest she has to make peace with Carly so they can come together as a family. Nelle will contend that their child matters more than any feud of the past. Michael might back Nelle up on that and promise to help her if possible.

Naturally, Nelle’s just laying it on thick with gullible Mikey. Carly’s about the last person in the world she’d ever trust. Peace is out of the question when you’re dealing with this level of conflict, so Nelle has more drama in store.

Carly will think something’s up with the pregnant schemer, so she’ll relay her fears to Sonny (Maurice Benard). He may agree that Nelle always has an agenda, but worrying about it shouldn’t be Carly’s priority. She needs to concentrate on getting the help she needs and hopefully healing her mind.