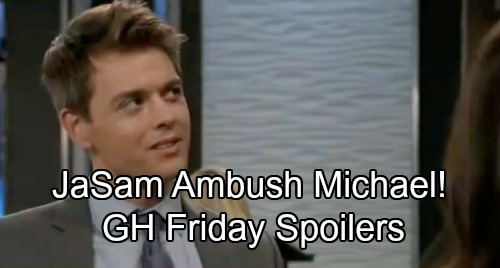 General Hospital (GH) spoilers for Friday, November 16, tease that Ryan (Jon Lindstrom) will have another chat with Ava (Maura West). She’ll be enjoying a drink at the Metro Court when he makes a suggestion. “Kevin” will contend that he has the perfect cure for something. He may sense that Ava’s stewing and offer a way to relieve some stress.

Ava and “Kevin’s” connection will strengthen, which should put her even further in the danger zone. She’ll start dating this killer soon enough, so there’s going to be trouble. In the meantime, Valentin (James Patrick Stuart) and Nina (Michelle Stafford) will have a tough confrontation. They’ll agree they don’t each other an explanation for their behavior or whereabouts, but there’ll be plenty of tension.

However, it looks like Valentin will get called away soon. Willow (Katelyn MacMullen) just summoned Lulu (Emme Rylan) to talk about Charlotte’s (Scarlett Fernandez) bullying. When Lulu arrives on Friday, Willow will suggest she’d like both parents there for what she has to say.

Naturally, Lulu will start to panic. She’ll worry about what Willow’s going to spill and she should be awfully upset when the truth comes out. At GH, Kiki (Hayley Erin) and Griffin (Matt Cohen) will discuss Sasha (Sofia Mattsson). Since Sasha recently made a move on her “sister’s” boyfriend, Kiki will think it’s time to drop a truth bomb. She’ll plan to set Sasha straight and convince her to stay in her lane.

Later, Kiki will follow through on her promise and confront her fake sis. Sasha won’t be happy when accusations are thrown at her! Over with Michael (Chad Duell), he’ll feel a bit ambushed. Sam (Kelly Monaco) will bump into Michael at the Metro Court and encourage him to open up. When Jason (Steve Burton) shows up as well, Michael will wonder if they planned this.

People run into each other all the time in Port Charles, so this will probably be a soapy coincidence. Nevertheless, Sam and Jason will want to be there for Michael. They’ll check on his mental state and hope Michael’s processing his grief successfully.

Other General Hospital spoilers say Sonny (Maurice Benard) will deliver a plea. He’ll ask Margaux (Elizabeth Hendrickson) to stand down and just let this feud go. Sonny won’t think it’s going to help either of them. Of course, Margaux will wonder what Sonny’s going to do if she doesn’t back off. She’ll ask if he intends to kill her, but she won’t be afraid of the big, bad Corinthos.