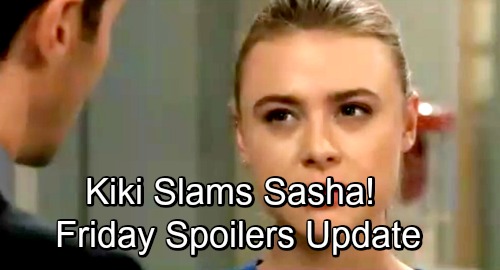 General Hospital (GH) spoilers for Friday, November 16, tease that Margaux (Elizabeth Hendrickson) and Sonny (Maurice Benard) will have a tense conversation. Sonny will be hoping to work through their issues and finally move on. Of course, Margaux will put up a fight. She’ll wonder if Sonny intends to kill her if she doesn’t do what he wants. They’ll go back and forth, but some progress should be made.

Meanwhile, Michael (Chad Duell) will grow suspicious of Sam (Kelly Monaco) and Jason (Steve Burton). He’ll run into Sam first, so they’ll sit down for a chat at the Metro Court. Jason will come along soon after, so Michael will smell a setup. He’ll ask if they’re trying to ambush him, but that probably won’t be the case. Port Charles isn’t that big, so coincidental encounters aren’t unusual.

Besides, Jason and Sam are like magnets. They always seem drawn to each other, no matter where they happen to pop up! At GH, Kiki (Hayley Erin) will tell Griffin (Matt Cohen) her plan. She’ll want to meet with Sasha (Sofia Mattsson) and help her understand that Griffin isn’t up for grabs. When that meeting actually transpires, Kiki will accuse her “sister” of hitting on her man.

Sasha will rush to her own defense, so there should be some clashing. Kiki and Sasha may end up fighting like real siblings. Too bad they aren’t! Over with Ava (Maura West), she’ll find herself even more drawn to “Kevin,” who’s actually Ryan (Jon Lindstrom). General Hospital spoilers say he’ll have a cure for the funk Ava’s in. Ryan will turn on the charm and keep pulling Ava toward the dark side.

At Charlotte’s (Scarlett Fernandez) and Aiden’s (Jason David) school, Willow (Katelyn MacMullen) will have some difficult news. Lulu (Emme Rylan) will want updates immediately, but Willow will delay her announcement. She’ll want to wait on Valentin (James Patrick Stuart) so she can tell both parents together. This is about Charlotte and her mean streak, so it should be hard for them to hear.

Before Valentin heads over, he’ll get harsh with Nina (Michelle Stafford) at Crimson. Valentin will snap that she doesn’t owe him any explanations. He’ll add that he certainly doesn’t owe Nina any. Valentin will be fed up with the way Nina’s dragging her feet on a reunion. He can tell Nina still loves him, so the frustration will create some conflict.

Nina and Valentin may get on the same page down the road, but the Sasha scheme should destroy their reunion attempt. Valentin’s plot will get away from him and that can only lead to a daughter disaster. We’ll keep you posted as other General Hospital details emerge. Stay tuned to ABC’s GH and don’t forget to check CDL often for the latest General Hospital spoilers, updates and news.