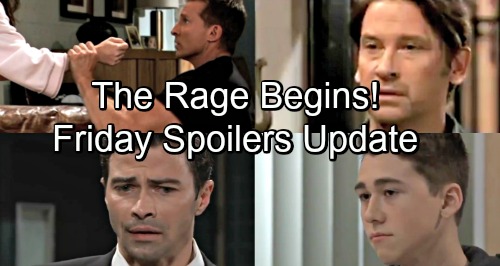 General Hospital (GH) spoilers for Friday, November 30, tease that reality will settle in for Ava (Maura West). She was in shock when she first heard the horrific news about Kiki (Hayley Erin). Ava truly struggled to believe it could be true. How could her oldest daughter be dead, just like that?

Sadly, Ava will have to face the facts on Friday. She’ll accept that Kiki’s gone forever and wail over her many regrets. As Ava sits on her bed at the penthouse, “Kevin” (Jon Lindstrom) will offer comfort. Of course, Ryan will put his own manipulative spin on it. He may find a way to twist Ava’s grief into bitterness. Ryan would certainly like to fuel Ava’s dark side and keep the woman he loves close.

Meanwhile, Curtis (Donnell Turner) will stun Nina (Michelle Stafford), Sasha (Sofia Mattsson) and Valentin (James Patrick Stuart). He’ll pass along some startling updates about Kiki’s murder and Griffin’s (Matt Cohen) arrest. It sounds like this homicide will really be the talk of the town.

Franco (Roger Howarth) and Liz (Rebecca Herbst) will receive word from Scott (Kin Shriner) on Friday. They’ll be hit with an immediate wave of heartache and anger. Liz is friends with Griffin, so there’s no chance of her believing he’s guilty. Franco may not buy him as the killer either.

However, you can bet Franco will do everything in his power to get to the bottom of this. He’ll want Kiki’s murderer to pay a steep price for the crime. At the police station, Anna (Finola Hughes) will rush to Griffin’s defense. She’ll hope to help solve the mystery and clear Griffin’s name.

Anna will consider how it all played out and argue that this was no random act of violence. She’ll contend that Kiki was carefully selected and suggest that the killer knew who to pin this on. It had to be someone who knew Griffin and Kiki were dating. Anna will do her best to sort this out, but her mind definitely won’t go to Ryan Chamberlain! He’s got the upper hand since everyone thinks he’s deceased.

Other General Hospital spoilers say Oscar (Garren Stitt) will need to power through his fears. At GH, Terry (Cassandra James) will ask if Oscar’s prepared to start his new treatment. His tumor’s growing daily, so they have to get this show on the road. With Drew (Billy Miller) and Kim’s (Tamara Braun) gentle encouragement, Oscar will hopefully begin the clinical trial.

Finally, Sam (Kelly Monaco) will catch Jason (Steve Burton) off guard. She’ll try to wake him up on the sofa, but he’ll jolt his hand up to clutch her arm. These two may share a chuckle over Jason’s reaction and perhaps throw back some coffee. Sam will undoubtedly thank Jason for sticking around while she was sick. His support meant a lot when she was suffering in bed.