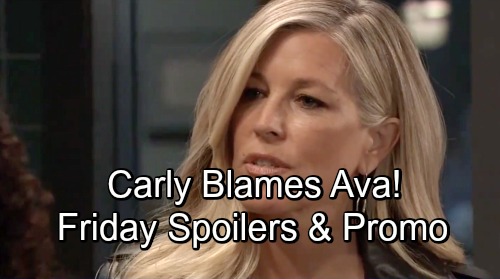 General Hospital (GH) spoilers for Friday, November 9, tease that Liz (Rebecca Herbst) will get a visit from Terry (Cassandra James). This GH doc will have a lot on her mind, so Liz will wonder how she can help. Terry might open up about the pressure of Oscar’s (Garren Stitt) case or perhaps some family issues. She’s alluded to the latter in the past, so the show might bring those problems back into play.

Meanwhile, Franco (Roger Howarth) will have an exciting chat. He’ll push a blonde to tell him everything, so maybe he’ll want to hear all about Kiki’s (Hayley Erin) new sister. Kiki recently made Sasha (Sofia Mattsson) her roommate as well. She’s hoping this arrangement will help them get to know each other a bit better and bond in the process.

General Hospital spoilers say Kiki will share her optimism with Griffin (Matt Cohen). Despite all the Ava (Maura West) drama, Kiki will think her life’s taking a turn for the better. Unfortunately, Sasha will start making moves on Griffin soon enough. Kiki may change her tune about this whole big sis thing!

Meanwhile, Nina (Michelle Stafford) will offer an apology. During a conversation with Sasha, Nina will suggest that maybe she crossed the line. She’ll be sorry if she acted out of turn over Sasha’s interest in Griffin and Ava’s manipulation. Nina will probably suggest that she just wants everything to work out. She doesn’t want to see Sasha get on Kiki’s bad side and potentially leave town over the friction.

Of course, Sasha doesn’t plan on going anywhere. She’s scheming with Valentin (James Patrick Stuart), so there are more messes to make. As for Griffin, Sasha will absolutely pursue him and that’ll indeed cause a sibling rivalry.

Other General Hospital spoilers say Jeanette (Ely Pouget) will demand some answers. She’ll quickly realize she’s been set up by Sonny (Maurice Benard) and Margaux (Elizabeth Hendrickson). Once Jeanette tells her daughter to explain, Margaux will argue that she came for the truth. Whether Jeanette offers it or not, Margaux already has a pretty good idea that Sonny’s right.

At the police station, Carly (Laura Wright) will grow frustrated. Her DNA was found on Mary Pat’s (Patricia Bethune) body, so Jordan (Briana Nicole Henry) and Chase (Josh Swickard) will interrogate her. You can bet Carly will get fed up fast! She’ll point the finger at Ava since Mary Pat’s corpse was found in her gallery.

However, Chase and Jordan will insist on following the DNA trail. Since Ryan (Jon Lindstrom) is seemingly setting up Carly, there’s a good chance the blonde hair in Mary Pat’s hands is a match. At GH, Ava will arrive for her next session with “Kevin.” She’ll ask if he’s ready for her, so “Kevin” will reply that he’s ready and waiting. Ryan will turn on the charm and hope Ava falls deeper in his web.

General Hospital fans won’t want to miss Friday’s hot episode. We’ll give you updates as other GH news comes in. Stay tuned to the ABC soap and don’t forget to check CDL often for the latest General Hospital spoilers, updates and news.