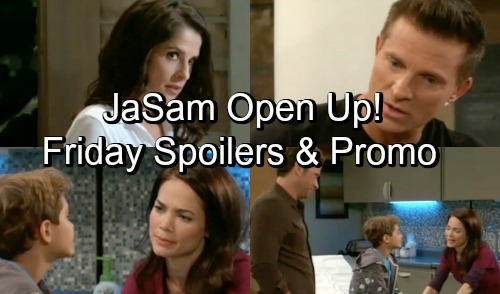 General Hospital (GH) spoilers for Friday, October 5, tease that Griffin (Matt Cohen) and Kiki (Hayley Erin) will discuss their relationship status. After Kiki finally made a move, they shared a passionate kiss. Once they come up for air, Griffin will admit he’s on board with this idea. He won’t think there’s anything stopping them from seeing where this goes.

Perhaps Kiki and Griffin will plan a date soon enough. Meanwhile, Maxie (Kirsten Storms) will demand some answers from Peter (Wes Ramsey). She’ll want to know why Peter’s avoiding her, so he’ll spell it out. Peter just doesn’t feel like he brings anything good to Maxie’s life.

Lulu (Emme Rylan) warned that Maxie was vulnerable, which made sense to Peter. He’s just trying to steer clear of Maxie and let her live in peace. However, that’s obviously not what Maxie wants. She may think there has to be a better solution than ignoring each other.

Cam insisted Aiden would be bullied if he showed off that princess pencil set. It seems that turned out to be the case. Of course, Liz and Franco won’t want to influence what Aiden likes. He should be free to enjoy princess stuff if he wants, but making the other kids accept that could be tough.

Across town, Josslyn (Eden McCoy) won’t accept that her breakup is real. She’ll have a bit of a meltdown as Cameron tries to pitch in. He’ll want to calm Josslyn, but does that mean he’ll ultimately reveal the truth? General Hospital spoilers say Cameron will refuse to cover for Oscar (Garren Stitt) anymore, so he’ll either have to blurt everything out or warn Oscar to come clean himself.

Meanwhile, Oscar will have another fight with his parents. Drew (Billy Miller) and Kim (Tamara Braun) won’t approve of his decision to become a high school dropout. Oscar just won’t see the point of going back to school. He believes he’s going to die anyway, so why should he spend his days stuck in a classroom? Oscar will make some good points, but Kim and Drew will still want him to have hope.

Finally, Jason (Steve Burton) will answer Danny’s (T.K. Weaver) question. They were chatting about the love found in families, so Danny wondered if his dad loved his mom. Jason will admit that he does as Sam (Kelly Monaco) listens nearby. That’ll prompt another question from Danny. He’ll ask if his mom loves his dad, too.

Maybe Sam will join them to assure Danny that it’s true. General Hospital fans will be anxious to see these sweet “JaSam” scenes. We’ll give you updates as other GH news comes in. Stay tuned to the ABC soap and don’t forget to check CDL often for the latest General Hospital spoilers, updates and news.