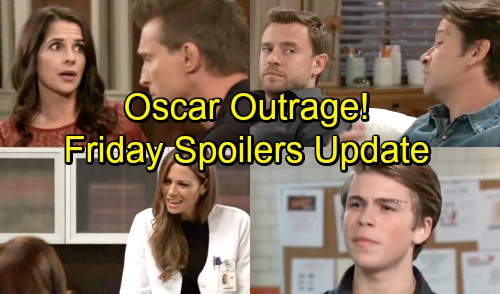 General Hospital (GH) spoilers for Friday, September 21, tease that Liz (Rebecca Herbst) will scramble to explain. After she tells Kim (Tamara Braun) about confessing to Franco (Roger Howarth), Liz will have to defend her decision. Kim won’t be happy that someone else knows about Oscar’s (Garren Stitt) brain tumor.

Liz already mentioned that she might have to come clean, but it appears Kim either didn’t pay attention or didn’t actually think she’d do it. Kim may feel like their trust has been broken, but Liz just couldn’t lie to Franco. They’ve been trying to work on being honest and not keeping secrets from each other.

Since Franco knows the truth, he’ll want to support Drew (Billy Miller) in his time of need. After Drew shares his frustration, Franco will wonder how this dad would feel in Oscar’s shoes. Would Drew rather stay in the dark or find out and prepare for the inevitable? Drew may contend that he’d choose the latter, but that doesn’t mean he’ll be willing to ignore Kim’s wishes.

Across town, Cameron (William Lipton) will clash with Oscar and Josslyn (Eden McCoy). As they work on a project together, Cam will snarl that there may not be a later for Oscar. The statement will catch Oscar and Joss off guard, but they may not solve the mystery just yet. Cameron might cover his blunder and head home to sulk, which would leave Oscar to ponder the deadly clue.

Other General Hospital spoilers say Chase (Josh Swickard) and Finn (Michael Easton) will get a visitor. Their father will suddenly arrive in Port Charles, buy why? Gregory (James Read) will admit this isn’t about catching up. He’ll seem glum, so he may have some tragic news to pass along to his boys.

Anna (Finola Hughes) will be brought in the loop as well, so she’ll want to be there for Finn. He’ll definitely need support thanks to the chaos Gregory causes. Over with Jordan (Briana Nicole Henry), she’ll call Margaux (Elizabeth Hendrickson) and provide some updates. Jordan will note that she found something Margaux will want to see. This GH investigation is really heating up!

Sam (Kelly Monaco) will also meet up with Jason (Steve Burton) and Sonny (Maurice Benard) on Friday. She’ll feel like Margaux poses a serious threat, so she’ll urge the guys to watch their backs. You just can’t be too careful when it comes to Margaux.

Sonny will do his best to deal with Margaux’s drama and protect Mike (Max Gail) from any charges. It won’t be easy, but Jason will do whatever he can to pitch in. General Hospital fans won’t want to miss all the action ahead. We’ll keep you posted as other GH info emerges. Stick with the ABC soap and don’t forget to check CDL often for the latest General Hospital spoilers, updates and news.