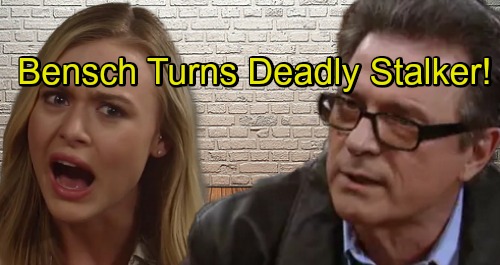 General Hospital (GH) spoilers tease that Dr. Bensch (James DePaiva) is not going to go away quietly. In the aftermath of Kiki’s (Hayley Erin) victory against him in the sexual harassment lawsuit, Bensch was fired from his position at General Hospital. He angrily left the hospital, and Kiki enjoyed a quiet moment of satisfaction.

But Bensch isn’t going to just go away. Sure, he’ll appeal the verdict (most likely on the grounds of inadequate counsel), but his chances of actually reversing the jury’s decision are slim. The jury rendered its verdict fair and square, and Kiki won despite her one-night stand with Griffin (Matt Cohen) coming out in the open.

Bensch likely knows that his chances of winning an appeal are nil. But that’s probably not what he really wants, anyway. Now that he lost his job, he’s angrier than ever, and what he likely wants is revenge on Kiki.

Kiki’s been used to watching her back around the hospital, since Bensch seemed to pop up everywhere. But now that Bensch doesn’t have access to Kiki at the hospital, he might start tracking her down in her personal life, so he can continue to get under her skin. This sexual harasser might just cross over into stalker territory!

If Bensch does start stalking Kiki, then Kiki will have a difficult road ahead of her. Stalkers can be extremely dangerous, but it’s difficult for victims to get much legal protection until the stalker actually makes an overt threat. Bensch is smart, and he’d surely know how to get around the law and just “accidentally” bump into Kiki everywhere she goes.

Bensch could devolve now that he’s been fired from his job. People like Bensch become especially dangerous when they have nothing left to lose…which is sort of where he is now. Kiki had better be careful!

Hopefully for Kiki, Bensch will keep his distance. But he’s pretty creepy. Do you think he’ll turn into a stalker to get his revenge? Stay tuned to the ABC soap and don’t forget to check CDL often for the latest General Hospital spoilers, updates, and news.