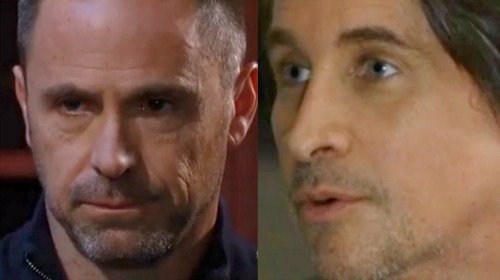 General Hospital (GH) spoilers tease that Finn (Michael Easton) and Julian (William deVry) will face off. GH fans know that Finn and Alexis (Nancy Lee Grahn) decided to stick with friendship. They chose to ignore the awkward aftermath of their sex session and move on. There’s a hint of attraction between them, but we all know they’re both hung up on other people.

Nevertheless, Finn cares about Alexis as a pal. They’re formed a strong bond, so Finn will feel protective of her when trouble arises. Meanwhile, Julian will probably misunderstand the nature of their relationship. He may take a few verbal jabs at Finn and start a fierce confrontation.

General Hospital spoilers say Finn will be pushed to his breaking point. He’s been stressed over his love life lately, so Julian’s pestering won’t go over well. Finn will eventually throw a punch, so Julian’s sure to be surprised.

Of course, Julian would prefer to stay out of legal trouble. He could obviously take down wimpy Finn in a heartbeat, but he may hold back for the sake of his freedom. Julian could take the high road and walk away. He might think that’s what Alexis would want him to do here.

General Hospital spoilers state that Alexis will rush to Finn’s defense later, so she may feel like Julian had it coming. Alexis knows that Julian tends to get people riled. However, Alexis may appreciate how Julian handled getting decked. He might show some maturity and inch closer to her approval.

Julian recently came to Molly’s (Haley Pullos) rescue, so that definitely scored him some gratitude. He’s making progress with his ex, which is great news for “Julexis” fans. Alexis and Julian seem destined for a reunion down the road, but it’ll take a lot of hard work to get there.

It looks like Finn and Anna (Finola Hughes) could be on the verge of getting back together as well. Andre (Anthony Montgomery) will urge Anna to follow her heart in the coming weeks, so maybe it’ll lead her straight to Finn. They felt a real spark and that’s something they shouldn’t dismiss.

Are you excited to see Finn and Julian’s big fight? Can Alexis and Julian find their way back to each other? Are you rooting for Anna and Finn? We’ll give you updates as other GH details emerge. Stay tuned to the ABC soap and don’t forget to check CDL often for the latest General Hospital spoilers, updates and news.