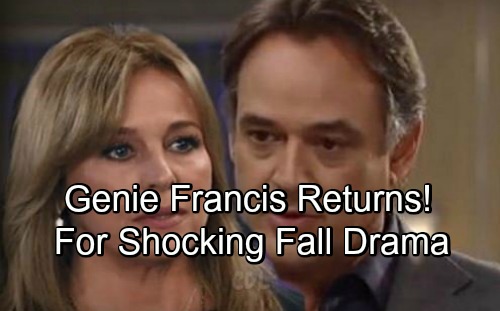 General Hospital (GH) spoilers tease that Genie Francis (Laura) is set to return to the ABC soap. Earlier this year, Francis was put on recurring status and Laura was sent off to be with Spencer (Nicholas Bechtel) after he suffered an off-screen skiing accident.

It was a shocking exit and came at a time when Laura was part of a major storyline. Laura had recently married Kevin (Jon Lindstrom) and was running for mayor of Port Charles. Fans were livid about the soap veteran’s departure and complained heavily on social media.

Now Daytime Confidential is reporting that Francis is set to begin taping again in September. That would put her on-screen arrival sometime in October or November. And it looks like fans can expect her to be heavily involved in a central storyline with plenty of excitement.

Earlier this year, ABC executive Nathan Varni spoke on a podcast about the nature of Laura’s return story, which writers were working on at the time. As Varni explained, “What we want is a prolific, big story for Laura that deserves the many talents of Genie Francis…we don’t want to have any tiny little story where she kind of blends into the background. We want a Laura-centric story.” 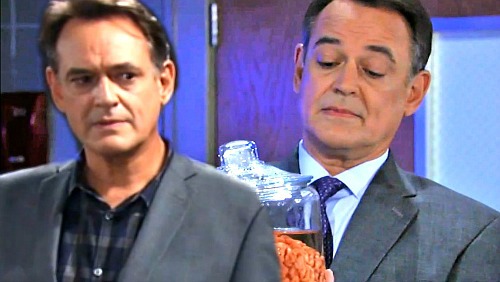 Fans should be thrilled to hear that a “Laura-centric” story is on the writers’ minds. And with Francis’ return set to occur at a time when Kevin’s identity may be in question, there are exciting possibilities for Laura.

Kevin treated Carly (Laura Wright) at Ferncliff, and fans know that there was a mysterious patient in the room next to hers who sent her “SOS” messages in morse code. Carly even had a brief look at this mystery patient while she was heavily drugged.

GH buzz is that this mystery patient may be Kevin, who is being held against his will at Ferncliff while his evil (and presumed dead) twin Ryan is impersonating him. That would mean that Carly was really interacting with Ryan all along.

And of course it would mean that Laura was really married to Ryan thinking he was Kevin. That could certainly be a major “Laura-centric” storyline for Genie Francis to return to! Laura would be horrified to learn that her husband wasn’t the man she thought he was and it would cause plenty of drama.

GH spoilers indicate that the Ferncliff mystery patient story is going to heat up as Sam (Kelly Monaco) and Curtis (Donnell Turner) get involved in an investigation there. Could they be looking into the mystery patient at Carly’s request? It would make sense since Carly now knows that evil deeds are done at Ferncliff.

Of course, whether the mystery patient ends up being an imprisoned Kevin remains to be seen. But it would be an exciting storyline for Laura to return to! We’ll give you updates as other GH news comes in. Stick with the ABC soap and don’t forget to check CDL often for the latest General Hospital spoilers, updates, and news.