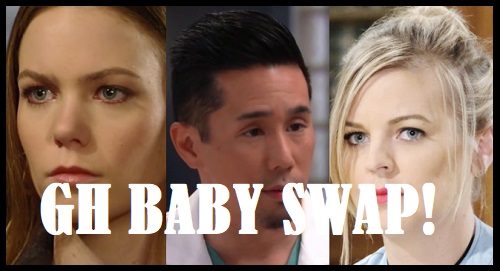 General Hospital (GH) spoilers reveal that something strange is going on. Nelle (Chloe Lanier) and Brad’s (Parry Shen) insta-friendship is highly suspicious. They’ve already progressed to the level of having dinner together and sharing hugs. Nelle also fiercely defended Brad when Michael (Chad Duell) warned it wasn’t a good idea to hang out with him.

GH obviously wants Brad and Nelle’s storylines to connect, but what’s this building toward? Let’s try to decipher a few of the clues. There are a couple of similarities between these two characters. Nelle and Brad both have shady histories, so that makes their friendship somewhat believable.

However, there has to be a bigger reason for Nelle and Brad to interact. GH doesn’t just throw in an odd friendship like this for no reason. Since Nelle’s pregnant and Brad’s adopting a kid with Lucas (Ryan Carnes), that seems to be a huge piece of this puzzle. General Hospital spoilers suggest that some baby drama will inevitably hit down the road. 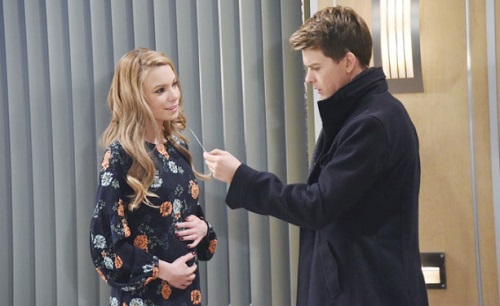 Nelle seemed just a bit too confident that everything would work out for Brad. He was nervous about his adoption turning into a nightmare, but Nelle insisted that there was nothing to worry about. Does Nelle know something that Brad doesn’t know? Could she be the anonymous birth mother who’s set to give her child up?

It sounds crazy, especially since Nelle desperately needs this baby to have any hope with Michael. Nevertheless, there are a couple of ways this plot would actually make sense – at least in Nelle’s insane world! Option one would be Nelle set up this anonymous agreement for money, but will ultimately change her mind.

Since Brad is her new bestie (and she might owe him a favor like changing her kid’s paternity), Nelle wouldn’t want to let him down. That could set up an unexpected version of the classic baby-stealing story. Nelle might keep her own child and swipe Maxie’s (Kristen Storms) for Brad. She would likely leave him out of the loop on that, which would be easy since this is an anonymous adoption.

That brings us to option two. What if Nelle planned to target Maxie all along? General Hospital fans will recall that Maxie wasn’t exactly nice to Nelle at Crimson. She also teamed up with Lulu (Emme Rylan) to expose Nelle’s tip to The Intruder. Nelle was on the verge of getting another chance with Michael, but Maxie blew it for her.

It’s clear that Nelle can hold a grudge, so does she intend to give Maxie’s baby to Brad and Lucas? If anyone can pull this off, it’s Nelle. Of course, that also means this scheme will fail miserably. Nelle’s plans tend to succeed at first, but they always fall apart in the end.

“You think I imagined all of this?!?” #GH55 pic.twitter.com/zxRlI8jxSQ