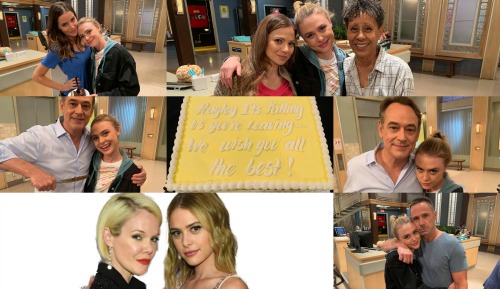 General Hospital (GH) spoilers tease that life in Port Charles just won’t be the same without Kiki (Hayley Erin). The beloved character was revealed as Ryan’s (Jon Lindstrom) next murder victim, so she’s gone from GH for good. Kiki drove some major storylines, and she’ll be sorely missed by fans.

Kiki’s portrayer, Hayley Erin, is going to be missed by her colleagues at General Hospital as well. GH recently posted a touching message on its Facebook page to Hayley, saying it was heartbroken to see her go but excited for what the future holds for her.

In addition, GH posted some behind-the-scenes photos of Hayley’s final moments with her fellow GH stars. The show provided a big yellow cake with “Hayley, It’s Killing Us You’re Leaving…We Wish You All The Best!” inscribed on top. It’s a fitting joke since Kiki was killed off the show.

Hayley is shown embracing William deVry (Julian), posing with Tamara Braun (Kim) and Vernee Watson (Stella), and enjoying cake with Sofia Mattsson (Sasha). She’s also shown in a couple photos with Jon Lindstrom (Kevin/Ryan), and in one Jon is playfully “threatening” Hayley with the cake knife while Hayley smiles big.

The post and photos have drawn hundreds of comments from viewers, most of whom are truly sorry to see Hayley depart from GH. But fans will be able to catch her on the Freeform series “Pretty Little Liars: The Perfectionists.”

We wish Hayley the best in her new endeavor. She’ll be missed from GH! Stay tuned to the ABC soap and don’t forget to check CDL often for the latest General Hospital spoilers, updates, and news.