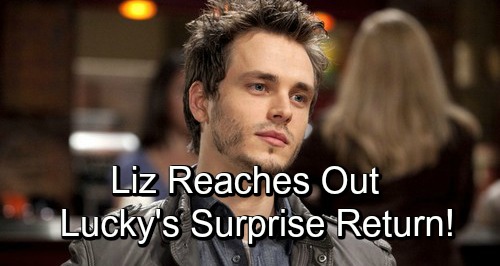 General Hospital (GH) spoilers reveal that the show has the perfect setup for a big return. During a chat with Laura (Genie Francis), Liz (Rebecca Herbst) admitted she was having a rough time. She felt guilty for lashing out at Aiden (Jason David), but she’s really at the end of her rope.

Laura offered a pep talk along with an intriguing suggestion. She wondered if Liz had thought about contacting Lucky Spencer (Jonathan Jackson). Liz confessed that it crossed her mind, but she was afraid it might do more harm that good. Still, Liz hovered over Lucky’s contact info on her phone later. Could that be a positive sign? Does GH have a Lucky comeback brewing?

Willow’s (Katelyn MacMullen) call interrupted Liz’s potential plan, but that doesn’t mean it won’t be revisited. In fact, Liz may have even more of a motive to call Lucky soon. After Willow and Liz’s parent-teacher conference, more information will come out. General Hospital spoilers say Liz will get some news that breaks her heart.

Charlotte (Scarlett Fernandez) will likely be part of Willow’s updates. Willow had to settle Charlotte down after she became rude in class and ultimately picked on Aiden. She may suggest that there are others who bully Aiden, too. Charlotte seems like the ringleader, but that could be egging the other kids on.

Liz may be relieved to know why Aiden seems to hate school so much. However, that doesn’t mean this problem will be easy to overcome. Even if the other children stop picking on Aiden, there’s no guarantee they’ll befriend him. Aiden will undoubtedly keep battling self-esteem issues and loneliness.

Franco (Roger Howarth) wants to be the one to help Aiden through this, but he hasn’t had any luck so far. Is it time for Lucky to step up? Liz felt like he’d come running if she filled him in. Whether that’s a good idea or not, Lucky’s only one phone call away. If Liz gets desperate enough, she might give it a shot.

There’s always a chance Jonathan Jackson would be willing to do a few shows. Dominic Zamprogna (Dante) recently returned for a special episode, so GH clearly reaches out to former cast members when they’re needed. The Bold and the Beautiful took Jacob Young off contract, so he might be another option.

Of course, the show could even recast and bring Lucky back on canvas permanently. General Hospital spoilers hint that Liz and Franco’s wedding may have to be postponed. That could leave the door open for a Liz and Lucky reboot. It might be a great way to shake things up in Port Charles!

What do you think about the recent Lucky mentions? Will General Hospital bring the fan favorite back on canvas? We’ll keep you posted as other GH details emerge. Stay tuned to the ABC soap and don’t forget to check CDL often for the latest General Hospital spoilers, updates and news.