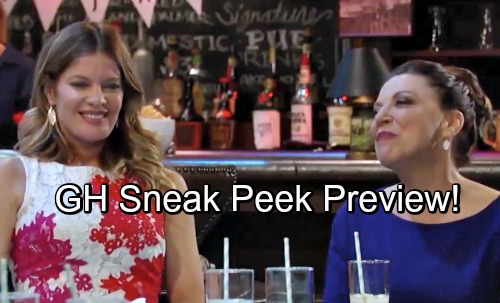 General Hospital (GH) spoilers tease that Maxie (Kristen Storms) will remain grateful on Monday. Liesl (Kathleen Gati) and Nina (Michelle Stafford) threw her a fun baby shower, which was no easy task thanks to their hostage! Peter’s (Wes Ramsey) strapped to the bed, but he’s still been a real handful.

To make matters worse, Nina and Liesl aren’t the best at keeping secrets. Sam’s (Kelly Monaco) been watching them like a hawk, so she clearly suspects they’re up to something. There’s a good chance she’ll be keeping an eye on them for a while. As for Maxie, she’ll express her appreciation to the party guests. They all decorated some onesies for James, so he’ll always be wrapped in love and comfort.

Maxie will also thank Nina and Liesl for hosting the gathering. She’ll give them a shout-out for their “unique fierceness” and Dr. O will start to say a few words. Of course, Nina will know that’s a terrible idea. Every time Liesl opens her mouth, something a tad incriminating comes out. Sam already knows Liesl’s been out in the woods supposedly doing primal scream therapy.

Liesl will opt to save her speech for social media, so they’ll wrap things up. Maxie will suggest that she’s looking forward to James’ homecoming. She learned she’ll able to take him back to her place soon, so that’s great news.

After a round of applause, General Hospital spoilers say Nina and Liesl will have a tense chat by the bar. Liesl will begin complaining about Peter again, but Nina will urge her partner in crime to shut up and listen. She’ll whisper that little James will have to visit them in Pentonville if someone finds Peter at the cabin.

Naturally, Liesl will insist that everything’s under control. She’ll assure Nina that no one’s going to locate their “guest.” While Liesl pushes Nina to relax, Maxie will corner Sam and ask for details about the plan. Sam will play dumb, but Maxie will try to pry the truth out of her. She’ll want info on how Sam and Curtis (Donnell Turner) intend to find Peter.

Sam will turn this around on Maxie and ask why she’s interested. She’ll wonder if Maxie really wants Peter found. Maxie will probably argue that this is about getting justice, but she must be concerned about Peter deep down. They had a strong GH friendship before all this blew up, so Maxie surely wants some peace of mind.