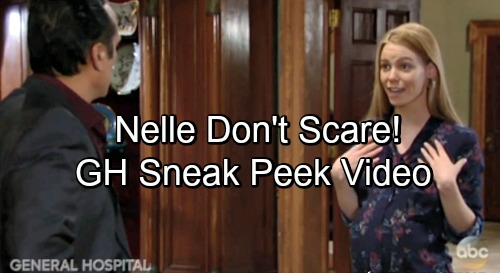 General Hospital (GH) spoilers tease that Sonny (Maurice Benard) will do his best to rattle Nelle (Chloe Lanier). He hates seeing Carly (Laura Wright) stuck behind bars because of this little schemer. Unlike Jason (Steve Burton), Sonny believes there’s a possibility Carly actually pushed Nelle down the stairs. He knows she’s been a mess lately, so he just can’t rule it out.

However, that doesn’t mean Sonny feels sorry for Michael’s (Chad Duell) “baby mama.” Nelle’s been a thorn in the Corinthos’ clan side for what feel like forever. Monday’s sneak peek offers a glimpse at Sonny and Nelle’s showdown. GH fans definitely won’t want to miss their veiled threats and bubbling anger.

When Sonny invites himself in for a chat, Nelle will remind him that she’s not alone. She’ll suggest that Monica’s (Patty McCormack) still there, but Sonny won’t be so sure. He’ll point out that Monica’s car wasn’t outside.

Nelle will remain calm as she faces this deadly mobster. She’ll contend that even if Monica is out, there are plenty of servants there to hear what goes down. It’ll be Nelle’s way of warning Sonny about crossing any lines. She’ll add that maybe Sonny should just say what he has to say and get out.

Nelle will also gloat about Michael moving back in to help with baby prep. She’ll note that it was nice enough for Monica to let her stay, but Michael’s return was unexpected bonus. Sonny will mention that Nelle finally got everything she wanted. He’ll hint that perhaps it’s time for Nelle to pay it forward.

General Hospital spoilers say Nelle won’t be surprised that Sonny’s scrambling. She’ll suggest she was wondering when Carly’s name would come up. Sonny may argue that if Nelle recants her statement, it’ll earn her even more points with Michael. He might want her to claim the fall boggled her brain a bit.

Unfortunately, Sonny won’t get his wish. General Hospital spoilers state that Nelle will stick to her story and assure Sonny that Carly’s going to pay. He’ll undoubtedly warn Nelle that what goes around comes around. When this is all over, Nelle will have just as much trouble headed her way. That baby can only protect her for so long!

Michael’s already on a mission to dig up dirt and clear Carly’s name. He’ll try to outsmart Nelle, so she should be in for a shock down the road. We’ll give you updates as other GH news comes in. Stay tuned to the ABC soap and don’t forget to check CDL often for the latest General Hospital spoilers, updates and news.