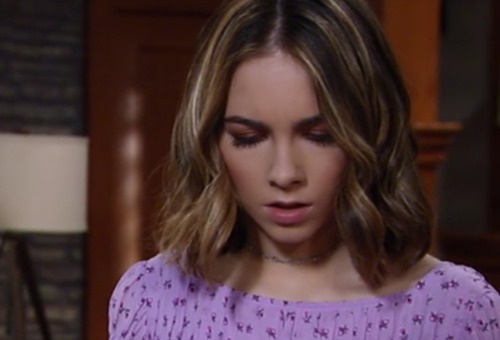 General Hospital (GH) spoilers reveal that one soap star just had quite a scare. Haley Pullos (Molly) recently filled GH fans in on an alarming medical crisis. On Twitter, Pullos mentioned her latest doctor’s appointment. Things took a frightening turn after Pullos arrived for her examination.

“Guess who fainted at the doctor’s office today,” Pullos said. She posted a couple pictures of herself to show she’s doing better, but it must have been a startling ordeal. Anyone who’s ever passed out will tell you that it’s a disturbing experience.

Pullos’ collapse was obviously a real shock, but at least she was at the ideal location! If you’re going to lose consciousness, the doctor’s office is a great spot for it. There were undoubtedly some helpful staff members who rushed to Pullos’ side.

After Pullos tweeted about the collapse, many concerned General Hospital viewers responded. Several Twitter users were quick to ask how she was doing. Pullos didn’t reply back, but she still offered some reassurance. She included an “lol” in her original tweet to suggest she was in good spirits about the whole thing.

Plus, someone tweeted that he hoped Pullos was OK now and she hit the like button. Other GH fans pointed out that Pullos managed to take some fabulous pics in spite of the issue. “Well you look radiant considering the circumstances,” one Twitter user teased. The girl’s got game when it comes to stellar social media photos.

It sounds like Pullos has recovered from the doctor’s office chaos, but we’ll give you updates if she shares any serious news. Let’s hope this was just a minor, one-time deal. As for what’s ahead in Port Charles, General Hospital spoilers say Molly has some fun scenes coming up. In another recent tweet, Pullos revealed that we’ll be learning Molly’s major soon.

Pullos noted that she didn’t know herself until it popped up in a new script. Be sure to listen for that tidbit in Molly’s future episodes. We’ll keep you posted as other General Hospital details emerge. Stay tuned to ABC’s GH and don’t forget to check CDL often for the latest General Hospital spoilers, updates and news.

guess who fainted at the doctor’s office today lol pic.twitter.com/k2aJK6rCPw