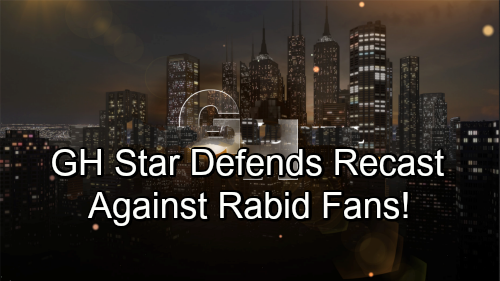 General Hospital (GH) spoilers reveal that an ABC soap star is standing up for his coworker. GH fans know Briana Nicole Henry recently debuted as the new Jordan. She took over for Vinessa Antoine, who left General Hospital to pursue other acting opportunities. The show must go on and Jordan’s needed in Port Charles, so Henry stepped in to fill the spot.

Curtis (Donnell Turner) hasn’t had any scenes with the new Jordan yet, but many “Jurtis” supporters are eager to see some. Recasts are always tricky to pull off, but Henry certainly has the no-nonsense police commissioner down pat. If she can pull off a spark with her love interest as well, perhaps we’ll be able to call this recast a success.

Most viewers are holding off judgment until we see more, but some fans are already disgruntled. That’s not fair since Henry’s only been on screen for a few episodes. It’s better to keep an open mind and truly give a new cast member a chance. This is a tough business anyway, so there’s no point in making the job harder.

Donnell Turner realizes that, so he felt the need to speak out. One Twitter user tagged Turner in a tweet about his scenes with Sasha Gilmore (Sophia Mattsson). She’s another GH newbie who’s playing Nina’s (Michelle Stafford) potential daughter. This fan argued that Curtis had more chemistry with Sasha than the new Jordan.

Obviously, no one can know that since Turner and Henry have yet to share the screen! Turner quickly responded with a tweet of his own. He asked, “What…are you trying to start?! You haven’t even seen us in a scene together yet! Foh!”

The same Twitter user insisted it was just an observation. This person suggested he or she didn’t need to see Curtis and new Jordan in a scene to know. That led to another reply from Turner. Instead of carrying on with a dumb fight, he just included a facepalm emoji and told the fan to have a nice day.

Sometimes it’s just better to let it go when a viewer’s not making any sense. Still, plenty of other fans tweeted their support for Turner. They appreciated how he stood up for his new costar and tried to stay positive about the recast. Maybe Henry will end up being a good fit on GH!