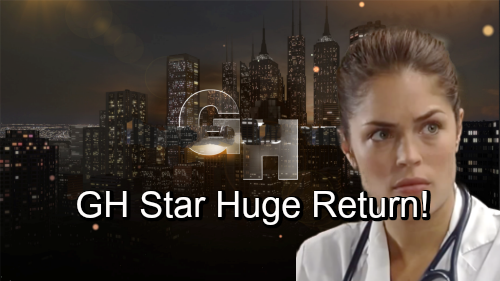 General Hospital spoilers reveal that a fun return is on the way as a GH star has comeback news. GH fans know Genie Francis is headed back to Port Charles as Laura, but she’s not the only familiar face we’ll see. It turns out Kelly Thiebaud also has a return stint in the works. She’ll be reprising her role as Britt Westbourne sometime in the near future.

Thiebaud decided to let the news slip on social media, so viewers are already getting excited. It should be interesting to check in with Britt and see how she’s doing. Britt’s been in prison, but there’s always a chance she’ll be released. Of course, an escape is another option. That’s especially true since Liesl Obrecht’s (Kathleen Gati) on the loose. It’d be great to watch those two team up on the run!

Then again, this could be a popup return where Britt’s still in custody. She might get a visit from someone surprising. Regardless, Thiebaud has given fans the confirmation they’ve been waiting for. The announcement came about after Thiebaud posted a cute video on Twitter. In the vid, she’s hanging out with her dog and enjoying a bit of people watching.

Thiebaud asked everyone what was up and filled her followers in on her location. “Whiskey and I are here,” Thiebaud said. “We’re just sitting on this park bench watching people run by – obviously judging their runs. I’ll keep you updated.” She seems to have a great sense of humor, which probably plays a part in Britt’s charm.

One General Hospital viewer watched the video and let Thiebaud know she was missing her on GH. That’s when Thiebaud divulged her comeback shocker. She replied, “Well no need to miss me cause I’m coming back!” She threw in the hashtag “#Britch,” which is her character’s hilarious nickname.

GH fans immediately blew up Thiebaud’s mentions with all their questions and suggestions. One General Hospital watcher asked if the return was long-term or short-term. He or she also wanted to know when to expect Britt on screen. Unfortunately, Thiebaud hasn’t offered answers just yet. GH may want to keep things mysterious for now!

Another viewer argued that it was time for Britt to interact with Peter (Wes Ramsey). She exclaimed, “She’s gotta meet her brother !! #britchandpeter.” It’d be nice for Britt to meet little James, too.

Well no need to miss me cause I’m coming back! #Britch