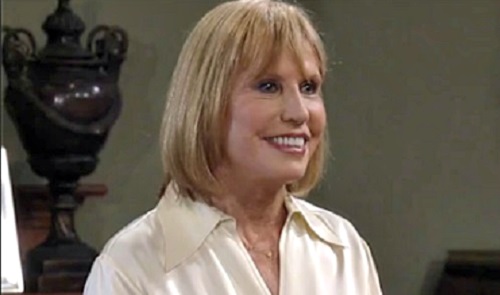 General Hospital (GH) spoilers tease that one Port Charles resident will soon have a new face – at least for a while. The show’s Twitter page had to make an unfortunate announcement recently. Leslie Charleson (Monica) took a fall thanks to her energetic pup. Her leg injury will take her off set for a while, so the role of Monica will be temporarily recast.

The statement said, “@lesliecharleson’s beloved dog, Riley Rose, was a little too eager for her morning walk and tripped Leslie – injuring her leg. Unfortunately, she will need to be replaced in shows already written.” Rushed recasts are never fun, especially when a General Hospital star’s hurt! It’s a shame to see Charleson sidelined, but everyone’s hoping she’ll heal and get back on her feet soon.

In a second tweet, the GH account echoed that sentiment. “She sends all her love and will be back as soon as she recovers. We wish her a speedy recovery and all the best.” There’s no word on the severity of Charleson’s injuries or how long she might be out of the picture. Nevertheless, the show must go on!

Now General Hospital faces the difficult task of finding a replacement for Charleson! No one plays Monica better, but there’s surely a fantastic actress out there who could step up. This isn’t the ideal situation, but we can make lemonade out of lemons here. Maybe it’ll be interesting to see a different spin on the character. Until Charleson’s cleared for GH duties, we might as well make the best of it. 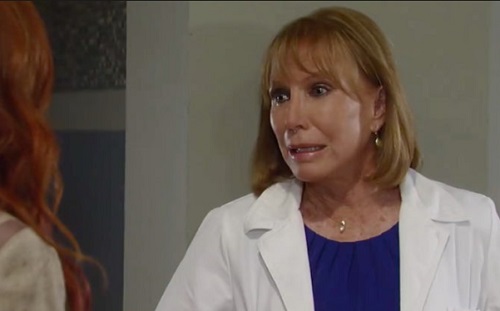 Still, we’ll all be anxiously awaiting Charleson’s comeback as the true Monica! In the meantime, let’s consider what Monica might be up to in the coming weeks. Will Nelle (Chloe Lanier) continue her manipulation? That seems likely. Monica’s getting duped by Nelle’s act, so the schemer’s plans are working out well.

General Hospital spoilers suggest Nelle and Monica’s bond could grow stronger before the baby’s born, so more trouble’s looming. Are you anxious to see who will temporarily replace Monica? We’ll give you updates as other GH news comes in. Stick with the ABC soap and don’t forget to check CDL often for the latest General Hospital spoilers, updates and news.

.@lesliecharleson‘s beloved dog, Riley Rose, was a little too eager for her morning walk and tripped Leslie – injuring her leg. Unfortunately, she will need to be replaced in shows already written. CONT’D… (1/2) pic.twitter.com/Ba645ILGR2