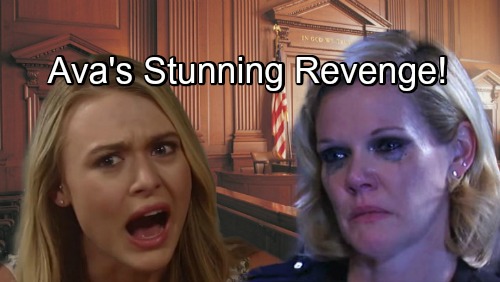 General Hospital (GH) spoilers reveal that Ava’s (Maura West) revenge mission has already started, but it’s only going to get worse in the coming weeks. Franco (Roger Howarth) accidentally texted Ava the startling truth. She was horrified when she looked down and saw a message about Griffin (Matt Cohen) having sex with Kiki (Hayley Erin).

Ava doesn’t have the whole story yet, so Griffin will undoubtedly enlighten her. He’ll try to make Ava see that this was all just a big mistake. GH fans will recall that Dr. Bensch (James DePaiva) behaved inappropriately at the Nurses Ball. That put Kiki in a dark place. She was overwhelmed and in desperate need of comfort.

Of course, Ava’s song choice didn’t go over well with Griffin. That sparked a fight and a breakup, so Griffin was technically unattached at the time. Nevertheless, Ava will feel like that hookup was inevitable. She’ll think Griffin has had the hots for Kiki all along. They’ve definitely been caught in their fair share of suspicious moments, so who can blame Ava for thinking the worst of them?

That’s especially true since they indeed betrayed Ava. Split or no split, Griffin shouldn’t have slept with Kiki that night. Ava will wonder if she ever really meant anything at all to Griffin. She’ll feel like a fool, so she’ll want both Griffin and Kiki to go down.

Unfortunately, Kiki’s already paying the price at the sexual harassment trial. It didn’t take Ava long to force the secret out in the open. She cares more about revenge than she does about justice for Kiki, so that says a lot about Ava’s rage level.

General Hospital spoilers say Griffin will get slapped soon, but that’ll be far from enough. Ava will undoubtedly have big plans for the former priest. Saintly Dr. Munro isn’t so saintly after all, so Ava will want the world to know.

In addition to the scandal from Kiki’s court case, Ava may use Griffin’s other secret to her advantage. We can’t forget that Griffin ordered an illegal DNA test to confirm Peter (Wes Ramsey) as Faison’s (Anders Hove) son. Griffin could lose his job if Ava exposes that shocker, so what better way to make him suffer?

Ava may have more in store for Kiki, too. She’ll at least give her daughter the cold shoulder and perhaps try to keep Kiki’s little sister away from her. Ava certainly wouldn’t be above cutting off contact between Kiki and Avery (Ava and Grace Scarola).