General Hospital Spoilers: Griffin’s Dark Side Emerges, Kiki’s Death Pushes Him Over the Edge – Ryan and Ava Pay the Price 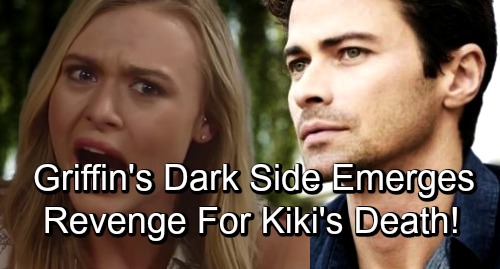 General Hospital (GH) spoilers tease that Griffin (Matt Cohen) could be headed down a dark path. GH is clearly setting the former priest up for trouble. Griffin saw some good in Ava (Maura West) and hoped he could work with that. He wanted to mold Ava into the better person he thought she could be.

Of course, Griffin has a much different perspective now. Ava’s revenge has shown him that she was never truly capable of change. There’s indeed a hint of good inside her, but the bad far outweighs it. Ava’s never going to be the saint Griffin wanted and that’s great news for GH fans. We need characters who will stir the pot and shake things up for the ones who act morally superior.

However, Griffin could be pushed to the dark side down the road. Perhaps he’ll join the ranks of General Hospital baddies – at least for a while. Griffin is quickly falling for Kiki (Hayley Erin), so that’s going to bring heartache. Since Hayley Erin’s leaving GH, there’s a good chance Kiki’s exiting as well. Word has it the show’s planning to kill Kiki off instead of recasting.

Ryan’s (Jon Lindstrom) infatuation with Ava makes Kiki’s death likely. He probably can’t convince Ava to murder Kiki herself, but he’d gladly to the honors for her. Ryan’s itching to get some deadly action in Port Charles anyway. Masquerading as Kevin (Jon Lindstrom) is only fun if Ryan gets to wreak havoc.

If Kiki meets a grim fate, it’ll affect plenty of characters. Griffin will certainly be one of them. That’s probably why GH is working hard to rev up Kiki and Griffin’s romance. The closer they are when tragedy strikes, the greater the pain will be. General Hospital spoilers say Griffin could be pushed to the edge. He may leave viewers taken aback by how far he goes for revenge.

Will Griffin take a dark turn and plot Ryan’s takedown? Could he join forces with someone like Franco (Roger Howarth), who also loves Kiki? What about Ava? Will Griffin make her pay for setting all this in motion? We’ll give you updates as other GH details emerge. Stay tuned to the ABC soap and don’t forget to check CDL often for the latest General Hospital spoilers, updates and news.