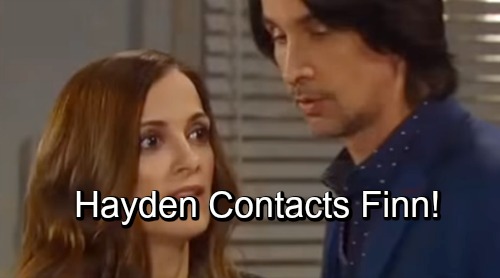 General Hospital (GH) spoilers tease that Finn (Michael Easton) is in for a shock. A startling message is headed his way and it’s coming via his ex, Hayden Barnes (Rebecca Budig). GH fans know Finn tried to search for Hayden with Curtis’ (Donnell Turner) help. Unfortunately, Hayden just didn’t want to be found. She eventually wrote Finn a letter that claimed she miscarried, but her baby bump told a different story.

If rest of the pregnancy went well, Hayden gave birth to Finn’s child and is presumably raising him or her somewhere. It turns out Hayden will reach out to Finn once again. Another letter will arrive during the week of November 12-16, so Finn will read it and try to figure out what it means. Why is Hayden reaching out after all this time? What does she want and how much will she reveal?

It’s possible there’s some health issue involving their son or daughter. If some donation is needed from Finn, that’d be a good reason to reach out. It’s also possible that guilt is simply taking a toll. Hayden could admit to her lies and tell Finn his kid survived. However, she’d probably be unwilling to disclose her location and let Finn meet him or her.

This could certainly revive Finn’s search for Hayden and create trouble in his relationship with Anna (Finola Hughes). It could be a big hurdle for the pair as the move forward. Still, it’s important to note that Finn’s already got major family drama going on. General Hospital spoilers say we’re building to some big revelations regarding Finn’s father, Gregory (James Read), and his stepmom.

Chase (Josh Swickard) will be part of the upcoming shockers, too. Anna is working on finding Liesl Obrecht (Kathleen Gati) and putting her behind bars. Plus, GH is developing their love story. There’s a lot going on at the moment, so they may not be quite ready to work Hayden back in the action.

With that in mind, this letter could be a way to mention Hayden’s name and offer a reminder. General Hospital doesn’t want us to forget about her! By letting Hayden leave with Finn’s child, they pretty much guaranteed she’d return one day. Hayden might be missing Finn and dealing with that guilt we mentioned, so she could just let him know she’s thinking of him.

This could definitely lead to a bigger storyline down the road, so it’s a good idea to keep an eye on the situation. We’ll give you updates as other GH news comes in. Stay tuned to the ABC soap and don’t forget to check CDL often for the latest General Hospital spoilers, updates and news.