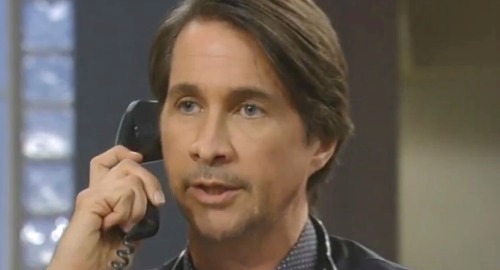 General Hospital spoilers tease that Hayden Barnes’ (Rebecca Budig) note to Dr. Hamilton Finn (Michael Easton) referring to “unfinished business” may hold a deeper meaning than to formally break up with him. Of course he doesn’t know that their baby lived, an important fact that Hayden left out when she bolted and left him standing at the altar!

But why after over a year did she contact him now, and instead of sending him the letter, put a note in the one she wrote to Curtis Ashford (Donnell Turner)?

Of course, Hayden may just have lost Finn’s address since she apparently has been traveling the world. But why after all this time did she decide to contact him to meet her overseas to take care of unfinished business? General Hospital fans know that Dr. Finn is a world-renowned infectious disease specialist, brought in to cure Tracy Quartermaine’s (Jane Elliot) brain worms.

Hayden was working for ELQ and staying in the Quartermaine mansion at the time, and she and Finn became acquainted and eventually fell in love and she became pregnant. At the time she left Finn at the altar, she’d just started to get close with her half-sister Elizabeth Webber (Rebecca Herbst) but she was also running from her ex-husband Jared (Matt Corboy) who had been released from prison and had tracked her down. He had taken the rap for something she did!

Could Hayden need Finn’s help because their baby has a rare disease, possibly life-threatening? Hayden will need to eat some humble pie to admit to Finn that she lied about the miscarriage, but he will quickly push his reactions to that aside when he finds out their child may be dying!

A trip around the world with a little baby with all kinds of germ exposure cannot have been easy; and if Hayden has been trying to fly under the radar, keeping up with healthcare and the baby’s immunizations may have been impossible.

Will GH viewers find out Hayden’s real reason for contacting Finn is to save their child’s life? Stay tuned to GH and keep checking up on General Hospital spoilers to see what develops!