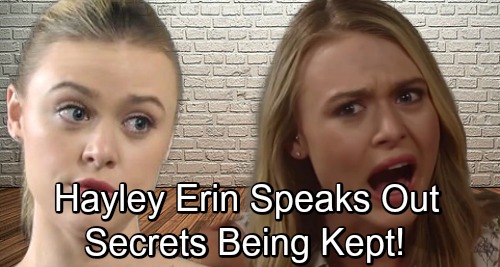 General Hospital (GH) spoilers tease that Kiki (Hayley Erin) is inching toward deadly danger. Ava (Maura West) is stuck in Ryan’s (Jon Lindstrom) perilous path, so she’s bound to pull Kiki into it. Ryan’s going to need more murder victims and Kiki seems like a good fit. That’s because it looks like Erin’s leaving GH in the near future.

Eric scored a role on Freeform’s Pretty Little Liars spinoff, but initially insisted that she’d try to do both shows. She was hoping her new part on The Perfectionists wouldn’t mean an end to her run in Port Charles. Sadly, it seems Erin couldn’t coordinate schedules or perhaps the work load was too much to bear.

Soaps can be notoriously tough on actors anyway, so adding another show on top of that would be incredibly difficult. It’s tricky to sort out the details of doing programs on two networks anyway. Whatever the reason, it appears Erin will be wrapping up her time as Kiki before you know it.

Ever since the news started buzzing around, General Hospital fans have been waiting on Erin to weigh in. She didn’t exactly address the issue everyone wanted to hear about, but she did break her social media silence on Friday. Erin at least hinted at some big developments and behind-the-scenes happenings. She seems excited and secretive, as you might expect under the circumstances.

Erin said, “I’ve been away from the social media’s for a minute, lots of life happening. Lots of secrets being kept. Just wanted to send love to anyone and everyone who needs it right now.” That “lots of secrets being kept” part is crucial. One of those secrets probably isn’t so secret since we’re talking about it right now. If Kiki gets murdered, it’ll be one of the worst kept soap secrets in a while!

Nevertheless, it’s nice to hear from Erin as we get ready for what’s next. There’s a chance Kiki will survive Ryan’s horror with serious injuries and ultimately be recast, Kristen Alderson comes to mind. However, we wouldn’t bet on it with all the death hints that GH keeps dropping. Viewers should probably just hope for the best and prepare for the worst.

I’ve been away from the social media’s for a minute, lots of life happening. Lots of secrets being kept. Just wanted to send love to anyone and everyone who needs it right now. ♥️