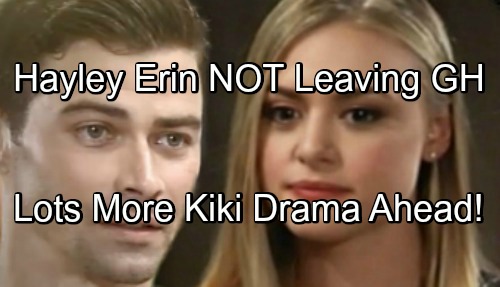 General Hospital (GH) spoilers tease that some fans are concerned about Hayley Erin’s (Kiki Jerome) future at the ABC soap. However, we’d say everyone should relax. Several unreliable sites out there are suggesting that Erin’s leaving the show, but they don’t have any real evidence.

Erin was cast in a Pretty Little Liars spinoff called The Perfectionists, which will air on Freeform in 2019. She’s glad to have a new project to work on, but that doesn’t mean she intends to neglect her role at GH. From the get-go, Erin’s been clear about her desire to do a juggling act.

After the initial announcement, Erin spoke out on her Twitter account. She said, “I suppose I’ll address this now…I have no plans to leave and hopefully it will all work out.” Since Erin herself hasn’t tweeted out any updates, we can assume those are still her plans. There’s no need to panic.

Some of those sites we talked about point to a Twitter bio change as proof. They argue that because Erin no longer mentions she’s a GH actress, it means she’s exiting the show. That just seems silly. For starters, it’s old news. Erin changed her bio a while back, so it’s not like this is some breaking shocker.

We wouldn’t read too much into her decision to switch it up anyway. Since Erin’s taking on a new gig, it’s not surprising that she changed her bio to something more generic. There’s no reason to include her entire list of acting credits. That’s what IMDB is for.

Now Erin’s Twitter bio simply says, “And it was cold and it rained so I felt like an actor.” That’s one of those artsy bios we’d all expect from someone in Hollywood, right? Many actors have posted similar blurbs, including other GH cast members. Some soap stars don’t even have a bio at all.

Plus, Erin hasn’t gone out of her way to delete any General Hospital mentions on her Twitter page. If you scroll through, you can still see her answers from a GH live chat. Erin still follows the show’s Twitter account, so there are no red flags here.

There are even General Hospital spoilers for Kiki this fall. She’ll consider the possibility of a real romance with Griffin (Matt Cohen), so all signs point to Kiki sticking around. That could certainly change later, but there’s no indication that Erin’s leaving at this time.