General Hospital Spoilers: Hayley Erin Reported OUT at GH – Will There Be a Kiki Jerome Recast? 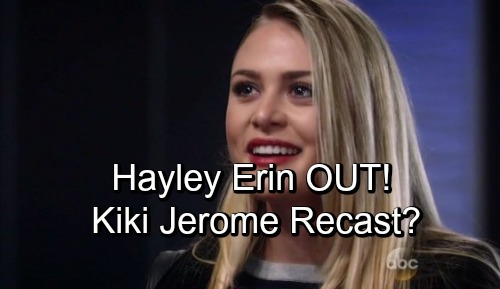 General Hospital (GH) spoilers tease that another big departure’s in the works. According to Daytime Confidential’s new report, it looks like Hayley Erin’s out as Kiki Jerome. The news is disappointing, but not surprising since Erin’s got another major project in the works. She’s signed on for a role in Freeform’s The Perfectionists, a Pretty Little Liars spinoff which will hit the air in 2019.

Erin has been open about her love for GH and the role of Kiki. She certainly expressed a desire to stick around and try to pull double duty. However, the typical soap grind is hard enough. When you start juggling another show on a different network, it seems downright impossible. In other words, it’s easy to see why Erin ultimately had to bow out at the ABC soap.

Eric will be focusing on her primetime career instead, so General Hospital fans wish her the best. We always miss soap stars when they move on, but it’s nice to see them succeed. Of course, this leads to questions about how GH will handle Erin’s exit. They probably only have three options to choose from.

The first one would be recasting Kiki, which might be tough on short notice. However, there’s a chance Erin notified GH a long time ago. Perhaps they’ve just been keeping it quiet and trying not to freak out fans. In that case, General Hospital could already be on the hunt for a new Kiki.

Another option would be sending Kiki out of town. If General Hospital really wanted to please viewers, they’d bring Dillon (Robert Palmer Watkins) back to beg for forgiveness. Dillon and Kiki were a great couple who deserved better! Since Dillon’s off canvas anyway, it’d be nice if Kiki could reunite with him. Soap watchers always love those “ride off into the sunset” kinds of happy endings.

Sadly, we can’t ignore the third and final option. Kiki could be killed off! After all, a killer’s currently on the loose in Port Charles. Ryan (Jon Lindstrom) will inevitably strike at some point, so Kiki could become his victim. Let’s hope not, but it’d be a mistake to dismiss the possibility.