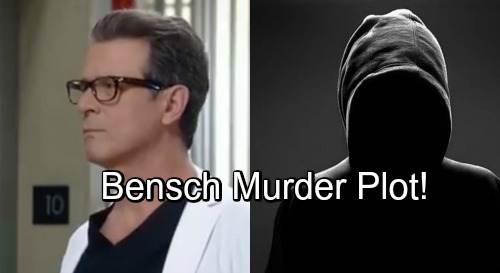 General Hospital (GH) spoilers tease that Dr. David Bensch (James DePaiva) had better watch his back. He spent months trying to get close to Kiki Jerome (Haley Erin) and coerce her into sex. Maybe it’s time for Dr. Bensch to endure some stalking as well. He may even get shot at before this is all over!

Kiki’s got plenty of supporters who could order a hit or at least make the doc think his life’s in danger. For starters, there’s Ava Jerome (Maura West). It wouldn’t be surprising if Ava took Dr. Bensch out herself. After all, General Hospital fans know she’s killed before!

Plus, Ava recently suggested that they may need an “alternate solution.” She mentioned Victor Jerome (Jack Axelrod) and implied that he wouldn’t have stood for this. Kiki pointed out that Victor’s dead and argued that doesn’t need anyone to fight her battles. However, that won’t stop Ava from acting if she feels it’s necessary.

Next, GH viewers should consider Franco (Roger Howarth). He’s already tried to rattle Dr. Bensch’s cage, but it didn’t really work. It seems Bensch either doesn’t know about Franco’s serial killer days or just doesn’t care. This guy’s a little too cocky if you ask us!

Kiki’s uncle could step up here, too. Julian Jerome (William DeVry) has been sticking to the straight and narrow lately, but he may be willing to backslide for Kiki’s sake. He surely still has mob connections he could turn to. Even if Julian just scares Dr. Bensch a bit, he could get involved.

Sonny Corinthos (Maurice Benard) might be another potential Kiki helper. He’s been busy handling Mike (Max Gail) and dealing with Carly’s (Laura Wright) ordeal, but he cares about Kiki’s well-being. She’s Avery’s (Ava and Grace Scarola) big sister and that certainly means something to Sonny.

Even Kiki herself could do something drastic. It’s tough to imagine her pumping a bullet in Dr. Bensch, but she might be willing to gaslight him. If her civil suit fails, Kiki’s vengeful desires may grow stronger. She may decide she has to take matters into her own hands somehow.

Regardless, Dr. Bensch may soon fear for his life. Will one of Kiki’s ruthless loved ones try to take him out? Will there be some plot that simply seems deadly instead? General hospital spoilers say some crazy drama’s brewing, so stay tuned. We’ll give you updates as other GH news comes in. Stick with the ABC soap and don’t forget to check CDL often for the latest General Hospital spoilers, updates and news.