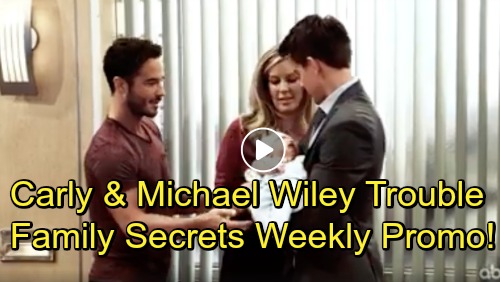 General Hospital’s new promo video teases that the claws are out and family secrets are too hot to handle this week in Port Charles. This is a fast-paced promo with lots of drama, so hold on! As for claws coming out, we’ve got some big-time action between Ava (Maura West) and Kiki (Haley Erin). The promo shows Ava catching Kiki and Griffin (Matt Cohen) together at Kiki’s apartment.

It looks like Kiki’s air conditioning may be on the fritz, as Kiki is cooling herself off with an ice cube. Ava appears at the door and interrupts them as they are enjoying beers and cooling off, but to Ava it will look like something a little more intimate is going on.

Ava will be furious at finding Kiki and Griffin together. “And here I thought you were suffering in solitude,” she’ll hiss. Ava will head to Charlie’s Pub afterwards to drown her sorrows in a couple of shots. And shockingly, Kiki is shown slapping her mother at the bar! Just what will Ava say to evoke that reaction?

In terms of family secrets, the promo touches on several. First, Brad (Parry Shen) and Lucas (Ryan Carnes) are shown at the hospital with Lucas saying “Oh my God” in response to something. This likely has to do with baby “Wiley,” as another scene shows Lucas putting Wiley into Michael’s (Chad Duell) arms with Carly (Laura Wright) standing by. Brad is shown looking not too happy about that, as he’d like to keep Michael as far away from Wiley as possible!

Next, Maxie (Kirsten Storms) and Lulu (Emme Rylan) have a chat at the Metro Court, and it looks like Maxie will be upset with Lulu about something. Could it have something to do with Lulu’s new story on the Ryan Chamberlin (Jon Lindstrom) murders? She’ll be opening up a old can of worms with Maxie’s family, especially with Felicia (Kristina Wagner).

Finally, Oscar (Garren Stitt) and Josslyn (Eden McCoy) are shown kissing while Cameron (William Lipton) jealously looks on. It seems that Oscar and Joss may be pushing forward with their relationship and living life to the fullest. Meanwhile, Drew (Billy Miller) and Kim (Tamara Braun) are shown having a tense conversation about Oscar. Drew tells Kim that he wants to tell Oscar that he’s sick, while a teary-eyed Kim looks horrified by the idea.

It sounds like a lot of great drama is headed our way this week! Be sure to stay tuned. We’ll give you updates as other news comes in. Stay tuned to the ABC soap and don’t forget to check CDL often for the latest General Hospital spoilers, updates, and news.