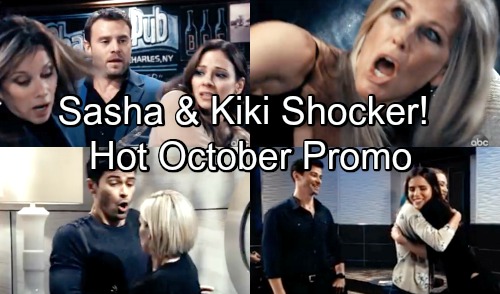 Next, we see Carly (Laura Wright) screaming “No!” and visibly reacting to something or someone. GH spoilers say that Carly will begin having difficulty dealing with the abuse that she experienced at Ferncliff a while back, so perhaps she’s having a nightmare about that horrible time in her life.

As for surprises, the promo also shows Ava (Maura West) and Griffin (Matt Cohen) literally running into each other at the Metro Court. It seems that wherever Griffin and Kiki (Hayley Erin) are, Ava is nearby. Ava’s still hell-bent on making Griffin and Kiki pay for their betrayal, and she’s always looking for an opportunity to strike.

Ava is shown getting a major opportunity to cause trouble. Ava will lurk in the background when Kiki meets her sister Sasha (Sofia Mattsson) for the first time. Griffin will accompany Kiki to the big meeting, and Ava will observe Sasha slyly checking Griffin out when she thinks nobody is looking. “So, Kiki and her new sister have the same taste in men,” Ava will say to herself. “I can work with that.”

Another big surprise will arise for Kim (Tamara Braun) and Drew (Billy Miller), when they learn that Oscar is suing them for emancipation. They’ll be horrified by the news, and by the fact that Alexis (Nancy Lee Grahn) is representing Oscar. Kim will take out all her frustrations on Alexis, as the promo shows her hauling off and slapping Alexis big time.

Kim will also seek out Sam’s (Kelly Monaco) help with Oscar. The promo shows Kim asking Sam for her help to save Oscar’s life. This will surprise Sam, who will wonder exactly what she can do to bring Oscar and his parents together, but Kim will explain.

It sounds like we’re in for some great scenes in the coming week! Be sure to stay tuned for all the drama. We’ll give you updates as other news comes in. Stay tuned to the ABC soap and don’t forget to check CDL often for the latest General Hospital spoilers, updates, and news.