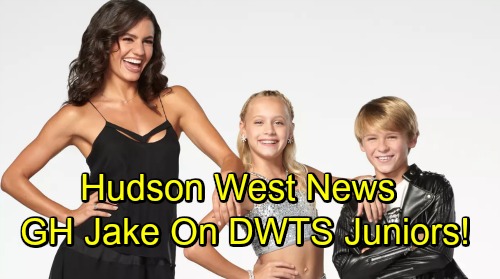 General Hospital (GH) spoilers tease that one ABC soap star is getting ready to hit the dance floor on DWTS Juniors. GH viewers know Hudson West for his fantastic performances as Jake in Port Charles. He’s a fan favorite who always brings plenty of heart to the role. Now West is branching out with a thrilling new project. He’ll undoubtedly put just as much heart into this one!

Dancing With the Stars: Juniors will kick off on Sunday, October 7. West will be one of the contestants in this exciting competition. He’ll join 11 other celebrity kid participants for a total of 12, so it’ll be quite a crowd. Of course, these competitors will have professional junior ballroom dancers as their partners. They’ll be showing off their moves in pairs as this reality contest begins.

West is just one of many talented performers in this star-studded cast. It’s always a good idea to size up the competition, so let’s consider who West will be going up against. Other contestants include: Addison Osta Smith, Alana “Honey Boo Boo” Thompson, Akash Vukoti, Ariana Greenblatt, Jason Maybaum, Mackenzie Ziegler, Mandla Morris, Miles Brown, Sky Brown, Sophia Pippen and Tripp Palin.

In addition to these young stars and their dance partners, expert mentors will be on hand. Each kid celeb will have someone in his or her corner to help. It’s great that they’ll get plenty of guidance along the way. They’ll all be playing to win, but the most important thing is to have fun. There’ll certainly be loads of that as they begin their choreographed routines.

We should also talk about the judges on DWTS: Juniors. Emmy-Award winning choreographer Mandy Moore will join the judges’ table along with Val Chmerkovskiy, a professional dancer from the adult version of Dancing with the Stars. Olympian and Dancing With the Stars: Athletes champion, Adam Rippon, will round out the group.

Again, you can catch the season premiere on Sunday, October 7. ABC will air a Dancing With the Stars: Juniors two-hour extravaganza starting at 8:00 p.m. EDT. Many General Hospital fans will be watching and cheering West on. Let’s hope he takes home the mirrorball trophy!